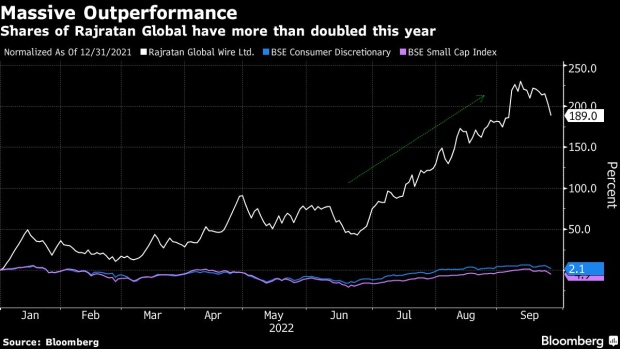 An employee pushes Bridgestone Corp's truck tires in a warehouse at the company's tire shop in Tokyo, Japan, on Thursday, July 30, 2020. Bridgestone will cut about 200 billion yen ($1.9 billion) of spending this year and issue a forecast that assumes another wave of Covid-19 infections in the coming months, Chief Executive Officer Shuichi Ishibashi said. Photographer: Toru Hanai/Bloomberg , Bloomberg

(Bloomberg) -- Volatile commodity prices may pose a threat to this year’s stellar rally in shares of Rajratan Global Wire Ltd., an Indian supplier to tire makers such as Bridgestone Corp. and Yokohama Rubber Co.

With no clear signs that the global macro economic situation will improve soon, demand for its products has waned in the July to September quarter as the company’s top customers stocked up on inventories and held back from fresh orders.

The company, which makes metal wires that hold tires together, has seen its shares rise around 190% this year, making it the second-best performer on a guage of consumer-discretionary companies in India. The firm, though, is concerned that stubborn inflationary pressures have eaten into demand -- both at home and abroad.

“Demand was more than our capacity until last quarter, but we see pressure on demand in the second quarter,” Chairman and Managing Director Sunil Chordia said in a telephone interview late last week. “Exports have come down, so tire companies are not operating fully.”

India’s financial year runs from April to March and the second quarter refers to the July to September period.

The Indore-based company plans to enter the European market in the next six months and is in talks with Bridgestone, Trelleborg Automotive Group AB and Nokian Tyres Inc. for tie ups.

“Europe is a big market for tire manufacturing and we have appointed a marketing person there,” Chordia said.