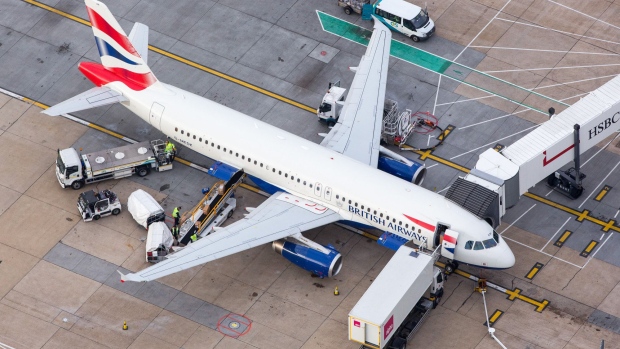 Luggage is loaded onto a passenger aircraft, operated by British Airways, a unit of International Consolidated Airlines Group SA (IAG), at London Gatwick airport in this aerial view taken over Crawley, U.K., on Monday, Oct. 24, 2016. The U.K. government will decide next week whether to expand London's main airport, Heathrow, or its rival Gatwick putting an end to decades of prevarication over what has become one of the most contentious issues in British politics. , Bloomberg

British Airways PLC plans to double its operations at Gatwick Airport, rather than expand at Heathrow Airport Ltd, the Sunday Telegraph reported.

The flag carrier intends to potentially double the number of aircraft based at the Sussex airport, going to between 24 and 28 planes from 14 currently, the paper said. The move comes after Heathrow was forced to limit passenger numbers this summer due to a shortage of baggage handlers and other support staff.

Alongside staffing issues, airline bosses have clashed with Heathrow’s management over landing fees. The airport would like to raise them to £42 from £30 per passenger. As things stand, the levy -- which falls on travellers, not carriers -- may fall to £26 next year under a plan by the UK’s Civil Aviation Authority.

The paper quoted Heathrow CEO John Holland-Kaye as saying the airport needed the additional revenue to invest in upgrades and maintenance. Luis Gallego, CEO of BA’s parent company IAG SA, said however, that the airport was using its market dominance to enrich shareholders.