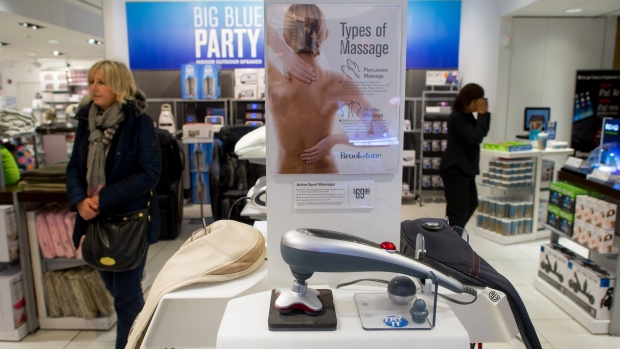 Massage items sit on display in a Brookstone Inc. store at the concourse of Rockefeller Center in New York, U.S., on Wednesday, April 2, 2014. , Craig Warga/Bloomberg

Brookstone Inc., whose quirky products are a staple of airport shopping, filed for bankruptcy protection from its creditors.

The specialty gift retailer, which sells everything from remote-control drones to massage chairs, is the latest in a spate of bankruptcies in an industry beat down by online competition and a surfeit of stores. Mall tenants in particular have suffered, leading to bankruptcies like Gymboree Holding Corp., and Rue21 Inc., which reorganized with fewer stores. Other merchants like Bon-Ton Stores didn’t survive.

This will be Brookstone’s second trip to bankruptcy court since 2014, when the Merrimack, New Hampshire-based company filed a Chapter 11 petition with a deal to sell its assets to Spencer Spirit Holdings Inc. for about US$146.3 million. A group of Chinese buyers backed by retailing conglomerate Sanpower Group and Hong Kong-based private-equity firm Sailing Capital subsequently outbid Spencer with a deal valued at about US$174 million.

The 53-year-old company began with an ad placed in Popular Mechanics, according to its website, and was named after the farm where the founders lived. In 1973, it expanded from its catalog offerings (with items like self-watering plant pots) to open its first store. The company says it helped introduce brands such as Fitbit and iRobot to American consumers.

--With assistance from Lauren Coleman-Lochner