Investors should have a balanced portfolio between tech and cyclicals: National Securities' Hogan

It’s all spurring the likes of Citigroup Inc. and JPMorgan Chase & Co. to warn of market excess in everything from blank-check companies to cryptocurrencies. Yet as fresh stimulus beckons, Wall Street firms are telling money managers to stay largely invested in rallying stock benchmarks. 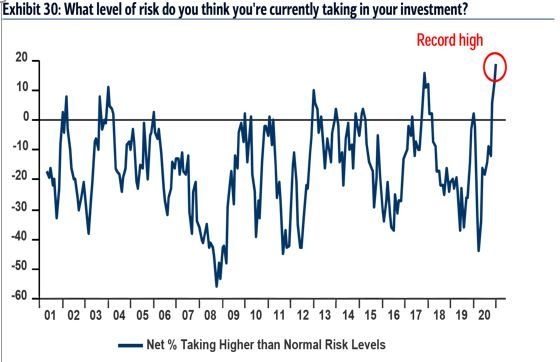 Those indicators are easy to find. Retail traders are fueling the most speculative trading strategies, the market for new issues is booming, short interest in the SPDR S&P 500 ETF Trust is near decade lows.

Data show stock buying rose further after the last round of pandemic-relief checks, and it isn’t just the retail crowd. A record number of investors with US$561 billion overall say they think they’re taking higher-than-normal levels of risk, according to Bank of America Corp.’s latest survey.

No wonder Clissold and Nguyen titled their research note “Are there any bears left?”

But they reckon overall market valuations are below the historical average when Treasury yields, corporate credit and cash are taken into account.

That’s a view echoed by Citigroup. The global strategy team led by Robert Buckland weighed global equity prices on both a relative and historic basis and concluded even expensive U.S. shares could have much more room to run.

“We would never advise anybody to chase a bubble,” they wrote on Friday. “It could burst at any time. But if CAPEs were to hit previous highs then the U.S. indices could go up another 50-100 per cent. And that’s just looking at absolute valuations. If we measure against bond yields then even the Nasdaq looks cheap.”

Yet hot IPOs, a rise in thematic investments, a boom in day-trader activity and “dramatic runs” in cryptocurrencies are all reasons why bubble fears have been thrust onto center stage, JPMorgan strategists led by Mislav Matejka wrote in a note Monday.

In a market awash with “excess” central bank liquidity, it’s a debate that will continue to rage, they said.

‘Pennies on the Track’

One aspect of that debate is the risk the same reflation trade boosting stocks comes with a sting in the tail for debt investors.

With benchmark Treasury yields failing to break above 1.2 per cent, swaths of investment-grade debt offer yields near or below zero, while U.S. junk-bond prices are near historic highs.

All that is storing up both duration and inflation risk. Rising consumer prices sap the value of the long-dated bonds in particular, other things being equal. That scenario may play out soon enough, with 77 per cent of respondents in Deutsche Bank AG’s survey last week seeing inflationary pressures.

Alberto Gallo, for one, is therefore playing defense. The money manager at Algebris Investments in London has put a third of his fund into cash and market hedges as he awaits bargains in a market selloff.

“A lot of what we see in the credit market is investors picking up pennies on the rail track,” he said. “With long-dated investment-grade bonds you have rate risk, and at the same time if there is a recession or resurgence of the virus with new variants, spreads can widen.”

History has shown there’s money to be made as a bubble inflates, the team at Citigroup noted. A proper bear market will come, but before then “markets may get more bubbly first,” they said.

Besides which, cash on the sidelines yields nothing.

“People complain about valuations but there is a lot of cash on the sidelines that still has to be invested,” Maria Staeheli, senior portfolio manager at Fisch Asset Management in Zurich. “There is quite a bit of an opportunity cost -- an actual cost given negative deposit rates -- if you don’t invest.”

Yet with historic cross-asset valuations and elevated risk positioning, BofA strategists warn that a market correction could be imminent.

“Today the market is very euphoric and there are few opportunities we like,” Gallo said. “To make money you’ve got to stay in a Goldilocks environment.”