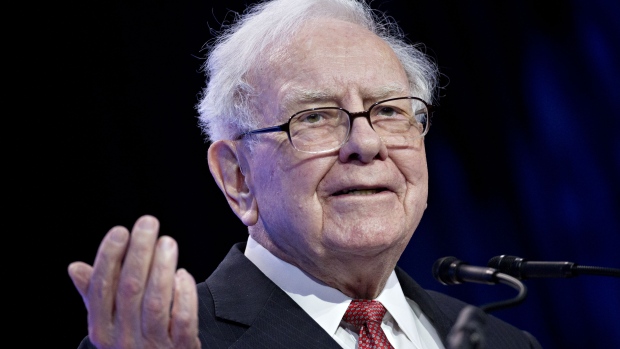 The billionaire’s company piled more than US$13 billion into those stocks in the quarter, making Berkshire a major shareholder in four of the five largest U.S. banks, according to a regulatory filing Wednesday. Berkshire disclosed a new stake in JPMorgan Chase & Co.(JPM.N)  and increased bets on Bank of America Corp. (BAC.N) and Goldman Sachs Group Inc (GS.N).

Buffett, 88, has long been one of the most influential bank investors and has been diversifying his bets in the industry. He’s already near a regulatory cap with a 10 per cent stake in Wells Fargo & Co., and is now also the biggest shareholder in Bank of America, US Bancorp and Bank of New York Mellon Corp.

A strong U.S. economy, rising interest rates and corporate tax cuts have propelled profits at the nation’s biggest lenders to record levels. Still, October’s market declines meant the early returns on Berkshire’s latest bets aren’t the best -- shares of six of its eight largest bank holdings are down so far in the fourth quarter.

The billionaire investor has been struggling to find large acquisitions to put a more-than US$100 billion pile of cash to work. In the third quarter, that meant more money flowed to stocks, including buying back Berkshire’s own shares. His net purchases of stocks in the period was the most he’s spent on that in more than four years.

Many of Berkshire’s bets on the largest banks --- a Goldman Sachs Group Inc. holding and even his Bank of America stake --- stem from investments he made during times of stress. In 2011, the billionaire investor agreed to invest US$5 billion into Bank of America for preferred stock and received warrants to buy common stock. Last year, he converted those warrants into a US$16.5 billion common stock holding in Bank of America. With additional purchases, Berkshire’s stake climbed to US$26 billion at the end of the third quarter.

The newly disclosed stake in JPMorgan deepens the ties between the two companies. Todd Combs, one of Buffett’s top deputies, is already on the bank’s board, and Berkshire has teamed up with JPMorgan and Amazon.com Inc. for a health-care venture. It’s unclear whether the stake was initiated by Buffett or his investing deputies, Combs and Ted Weschler. But Buffett said in 2012 that he had a personal investment in the bank run by Jamie Dimon.

The Travelers stake represents a rare bet on an insurer that competes with Berkshire’s own Geico unit. That holding was valued at US$459 million at the end of the third quarter.

Berkshire’s biggest holding, Apple Inc., is a relatively new one that has swiftly climbed to the highest spot in its more-than US$207 billion stock portfolio. Two years ago, Buffett’s company disclosed that it was piling into the iPhone maker after years of typically avoiding investments in technology companies. Now, Berkshire has a stake of 252 million shares, worth about US$57 billion at the end of the third quarter. The newfound interest in tech companies was also reflected in the US$2.1 billion bet on Oracle.