Bumble Inc., the dating app that gives women the first move, added new users in the first quarter and reported a jump in revenue, but remained cautious about how fast people will return to in-person socializing.

“It’s still unpredictable,” Chief Financial Officer Anu Subramanian said on a call with analysts after reporting results. “There isn’t always a perfect correlation between when a market opens up and when people actually start engaging actively in the dating ecosystem.” The shares fell about 2.4 per cent in late trading, after closing at US$47.24 Wednesday in New York.

Sales rose 43 per cent from the same period a year earlier to US$171 million, beating the average analyst estimate and the company’s own prediction made in March. Total paying users increased 30 per cent to 2.8 million, with an average revenue per user of US$19.99, a more than US$2 increase over last year, Bumble said Wednesday in a statement.

The Austin-based company is predicting sales of US$175 million to US$178 million in the current quarter, a range higher than the average analyst’s forecast.

“Investors may have been looking for a stronger raise to the outlook given the solid performance in the quarter, particularly with more reopenings slated for the second half of the year,” said Bloomberg Intelligence analyst Matthew Martino.

Bumble, which raised US$2.15 billion in its public stock offering in February, was launched in 2014 by co-founder and Chief Executive Officer Whitney Wolfe Herd as a way to change the dynamics of dating for women. It has subsequently added features, such as Bumble BFF and Bumble Biz, that introduce new friends and business contacts, respectively. Bumble and rival Match Group Inc. have had to adapt and innovate during the pandemic, coming up with new ways to keep people engaged online and finding relationships over video and chat while restaurants, bars and other social venues were locked down.

Now with more people vaccinated and cities opening up, Bumble will be looking to keep users engaged both on-and-offline. It’s planning to open a wine bar in New York this summer, Wolfe Herd said in an interview with the Wall Street Journal Tuesday. 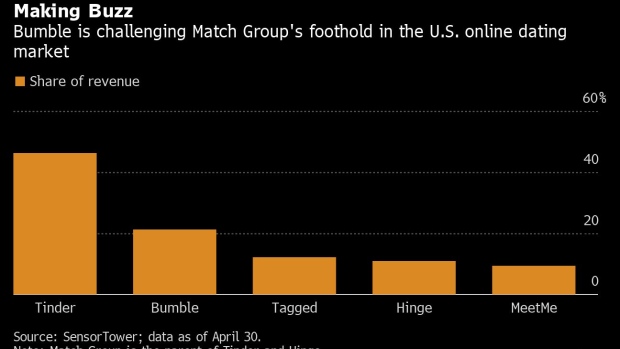 Wolf Herd said aside from dating, the friendship sphere will be “the next social growth horizon.” Bumble will be increasing spending on maketing to capture “pent up demand” as economic and health conditions improve across regions.

The company touted strong gains in international markets and significant traction in its Bumble BFF product which saw engagement grow 44 per cent for women and 83 per cent for men.

Bumble’s women-centered approach has been popular with female users especially as the company makes efforts to prioritize safety and curb unsolicited messaging through advanced reporting features and an anti-body-shaming policy.

The company’s namesake app increased sales by 61 per cent in the first quarter as the pandemic began to wane in North America, its primary market. Badoo, which is focused on Europe, posted an 18 per cent increase in revenue.

The stock has dropped about 40 per cent from its peak on Feb. 16 and is now about 10 per cent above its US$43 offering price.