A company catering to women and led by women has made its 31-year-old female founder a billionaire.

Shares of Bumble Inc., the owner of the dating app where women make the first move, soared 67 per cent in its trading debut to US$72 at 1:03 p.m. in New York, valuing Chief Executive Officer Whitney Wolfe Herd’s stake at US$1.5 billion.

The listing caps a saga that’s both inspiration and cautionary tale for women tech founders. Wolfe Herd capitalized on an underserved market and built a multibillion-dollar company that was in a sense born from one of the most vexing obstacles to women entrepreneurs: sexual harassment.

“This is a huge win,” said Allyson Kapin, general partner at investment firm W Fund and founder of the Women Who Tech network. “Whitney saw an opportunity that wasn’t being addressed for women and based on her expertise she’s made it into this gold mine, not just for her and her team but also her investors.” 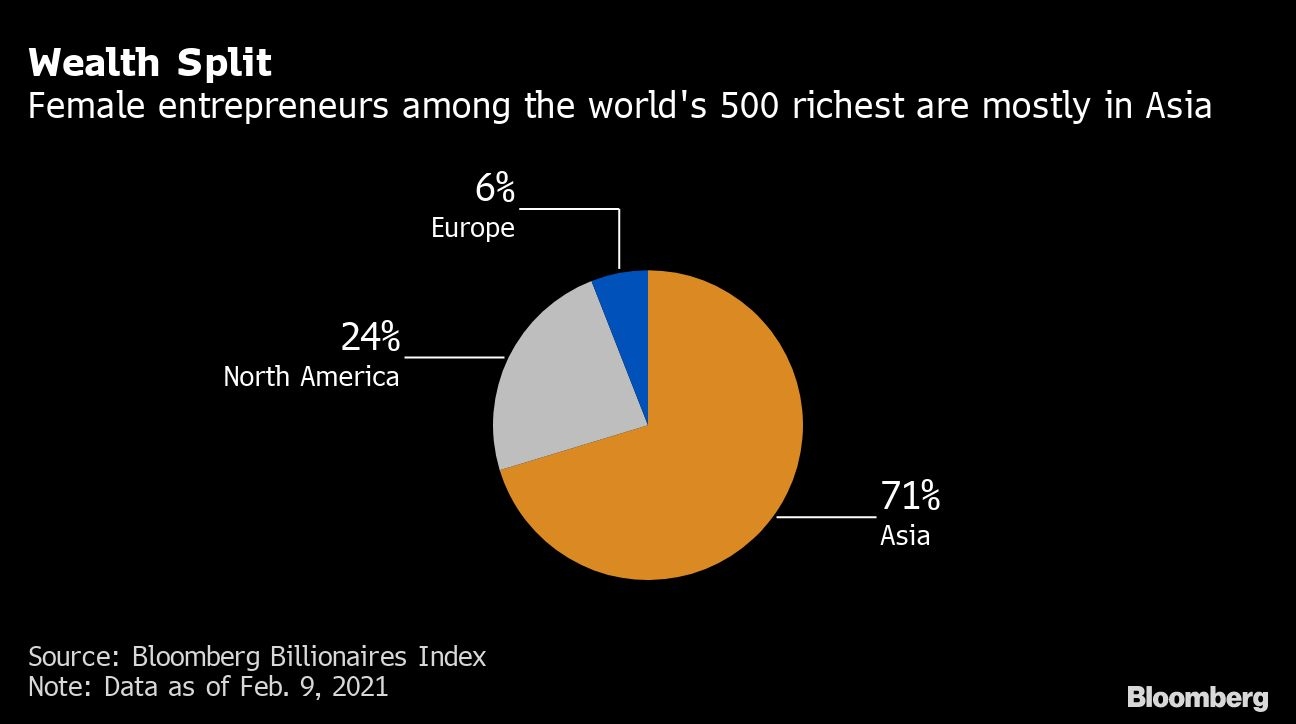 Bumble’s IPO launches Wolfe Herd into a rarefied club of self-made female billionaires. While women make up about half of the global population, self-made women -- mostly from Asia -- account for less than 5 per cent of the world’s 500 biggest fortunes, according to the Bloomberg Billionaires Index. Self-made men comprise almost two-thirds of the wealth index.

Of the 559 companies that have gone public in the U.S. over the past 12 months, only two, aside from Bumble, were founded by women. It’s the same with blank-check firms, Wall Street’s favored wealth-boosting vehicle of the moment. Women-sponsored SPACs totaled fewer than a dozen, a fraction of the 349 that listed in the past year.

That means women are largely being left behind in what’s likely the fastest wealth-creation boom in history. Last year the world’s 500 richest people gained US$1.8 trillion, yet 91 per cent of that windfall went to men, according to the Bloomberg index.

Among the numerous impediments to women and other underrepresented groups in the startup world, including people of color, harassment is one of the most pervasive. A Women Who Tech survey last year found that 44 per cent of female founders polled reported they’d experienced harassment on the job, with more than a third of that group facing sexual harassment.

It was harassment in fact that spurred the creation of Bumble. Wolfe Herd founded the Austin, Texas-based company in 2014 following her departure from Tinder, the rival dating app she helped found. The split was acrimonious, marked by a sexual harassment lawsuit Wolfe Herd filed against the company, alleging among other things that she was repeatedly called derogatory names by executives and stripped of her co-founder role since having a “girl” with that title “makes the company seem like a joke.” The suit was later settled.

The experience was formative. She initially wanted to create a female-only social network for women to send each other compliments but ended up focusing on match-making on the advice of Russian tech billionaire Andrey Andreev, the founder of dating app Badoo.

With Andreev’s backing, Wolfe Herd created Bumble as a service “by women, for women,” touting it as a place where women were empowered and harassment was rigorously policed. It’s become the second-most popular dating app in the U.S. with the help of advertisements bearing tag lines such as: “Be the CEO your parents always wanted you to marry.”

Wolfe Herd took over from Andreev when Blackstone Group Inc. bought a majority stake in Bumble’s owner at a valuation of about US$3 billion last year. As part of the deal, Wolfe Herd received about US$125 million in cash and a US$119 million loan that she’s since repaid in full.

“I felt very comfortable handing the baton to Whitney,” Andreev said in an email. “She has proved to be very insightful and innovative in the dating space.”

Wolfe Herd’s partnership with Andreev helped her surmount a key obstacle to women-led, women-focused startups: funding. Less than 3 per cent of venture capital dollars go to startups founded by women, according to Pitchbook data, a figure that’s barely budged over the past decade.

The tendency of venture capitalists to fund what they know and who’s in their network sustains the gap. And that’s despite evidence suggesting women-led startups actually produce better returns than those founded by men. Studies by the Kauffman Foundation, MassChallenge and BCG found that female-founded companies generated more revenue and were significantly more capital efficient.

“This isn’t about charity, it’s about making a ton of money,” said Women Who Tech’s Kapin.

Another high-profile listing on the horizon is that of the Honest Co., a baby and beauty products company co-founded by actress Jessica Alba that’s said to be preparing to go public.

Women in the startup world are optimistic about a rising tide. “Whitney’s success will help further the case for investing in businesses that serve a female audience or that are founded by women,” said Austin venture capitalist Kelsi Kamin. “It’s a super exciting time.”