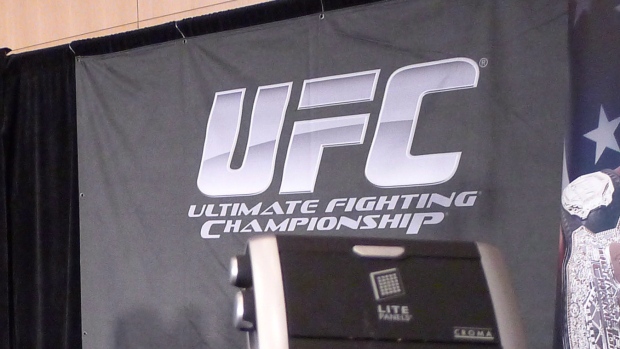 The Ultimate Fighting Championship logo is displayed at a Toronto event. , The Canadian Press

The issuer of the world’s largest pot ETF is embracing celebrities’ growing interest in cannabis, sponsoring a UFC fighter nicknamed the Boa Constrictor.

In a highly unusual move for a provider of exchange-traded funds, ETF Managers Group LLC has signed on as the official training sponsor of Alexey Oleynik, the ninth-ranked heavyweight in the Ultimate Fighting Championship, a mixed-martial arts organization. The issuer is best known for the ETFMG Alternative Harvest ETF, which has about $1.1 billion invested in cannabis-related companies.

Several recent tweets from Oleynik’s Twitter account show him training -- and even mowing the lawn -- in T-shirts emblazoned with MJ, the pot ETF’s ticker, and the logo of ETF Managers Group. While most tweets don’t reference ETFs beyond tagging that fund and including ETFMG’s Twitter handle, one post in March described the company as an “ETF heavyweight.”

“It’s definitely not something you see as a common practice,” Tricia Vanderslice, ETFMG’s chief marketing officer, said in a phone interview. “We like to look at unique marketing that does justice to both the sector our product represents and the audience that we’re trying to hit and speak to and educate.”

MJ is one of the best-performing unleveraged U.S. ETFs of the year. Securities and Exchange Commission filings show that less than 12% of its shares are owned by institutional investors such as mutual funds. The UFC sponsorship is targeted at individual shareholders who don’t necessarily follow the financial media but may be big UFC fans, Vanderslice said.

“You hit that group of Average Joe investors that might be using E*Trade, they might be using Robinhood, and a big piece of that is brand awareness,” she said.

It’s not unheard of for an ETF provider to promote itself through sports sponsorships, said Stacy Fuller, a partner in the investment-management practice at K&L Gates. The Invesco Series QQQ, for example, is a tennis circuit named after a fund that tracks the performance of the Nasdaq 100 Index.

However, promotions of specific ETFs and mutual funds generally require disclaimers about fees and risks, and where an investor can find a prospectus, said Chris Carlson, attorney in the investment-management group at Thompson Hine.

“By mentioning a specific fund, and obviously they’re going after a particular kind of clientele, I think that makes it a little bit outside the norm,” Carlson said.

To be sure, this isn’t the first formal association between the pot industry and a celebrity, or even the UFC. Aurora Cannabis Inc. last month announced an exclusive partnership with the mixed-martial arts organization to conduct research into the relationship between hemp-derived CBD products and athlete health.

Other cannabis-celebrity partnerships include golfer Bubba Watson, who has a multi-year endorsement deal with cbdMD Inc., and Gene Simmons of the rock band Kiss, who’s the “chief evangelist officer” for Invictus MD Strategies Corp. Meanwhile, Martha Stewart has an advisory role at Canopy Growth Corp. to help develop a line of CBD products for humans and animals.