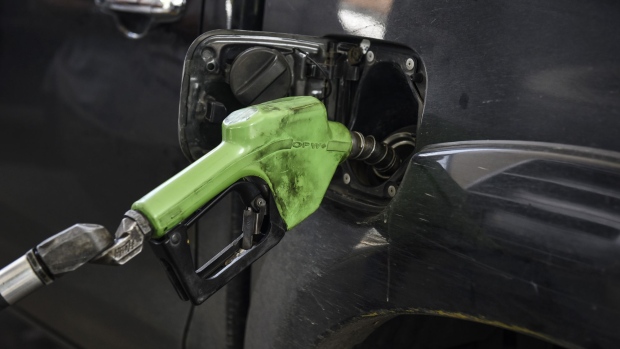 A fuel pump sits in the gas tank of a vehicle at a Petroleos de Venezuela SA (PDVSA) gas station in Caracas, Venezuela, on Friday, Aug. 3, 2018. President Nicolas Maduro promised to roll out a new gasoline policy as Venezuela sinks deeper into crisis, with a three-hour power outage leaving its capital in the dark on Tuesday just as the president planned to address the nation. , Bloomberg

London, Kentucky, has become the first U.S. city to see pump prices fall below US$1 a gallon as coronavirus-related lockdowns halt transit across the country -- and it won’t be the last.

Several others are poised to join the club in the coming days as the pandemic crushes fuel demand and sends the economy to the brink of a recession. While cheap fuel usually spurs gas-guzzling Americans to hit the highways, the latest downturn in prices portends dark times ahead.

Nationwide, pump prices are headed for depths not seen since the Great Recession. Retail gasoline is expected to average US$1.99 a gallon in the next 72 hours and fall as low as US$1.49 by mid-April, the lowest level in 16 years, according to Patrick DeHaan, head of petroleum analysis at Gasbuddy.

The downturn comes as large swathes of the country are under containment orders in an effort to curb the virus that’s killed more than 15,000 people globally. U.S. unemployment could rise 30 per cent this quarter while the GDP may drop by 50 per cent. In that environment, low gasoline prices won’t induce consumption in the way it typically does, and may instead be yet another indicator of a struggling economy.

Oklahoma City may be the next to reach sub-US$1 gasoline, with two stations already at US$1.05, DeHaan said. Illinois also could soon join the list, as Chicago wholesale gasoline sold at a record-low 20 cents Monday morning, Bloomberg data show.

Pump prices are chasing gasoline futures lower. Futures in New York plunged 63 per cent in March alone as coronavirus containment measures grip major U.S. cities, bringing the nation to an economic standstill. On average, about 28 cents in taxes and fees are added to the price of gasoline paid at the pump, according to RJO Futures, with the retail price typically lagging futures by about a week.

Prices would fall even further if it weren’t for the food-delivery drivers and long-haul truckers who are in high demand now that more Americans are self-isolating.

The last time an individual gas station sold fuel for less than US$1 was in 2016 in Iowa, according to GasBuddy. The national average last held that level in 1999, U.S. government data show.

“We’re in uncharted territory,” Bingham said. “It’s not just commuting patterns like going to work, it’s other indicators that go hand in hand with the economy and gasoline consumption. That shock is going to exceed what we saw in the Great Recession.”