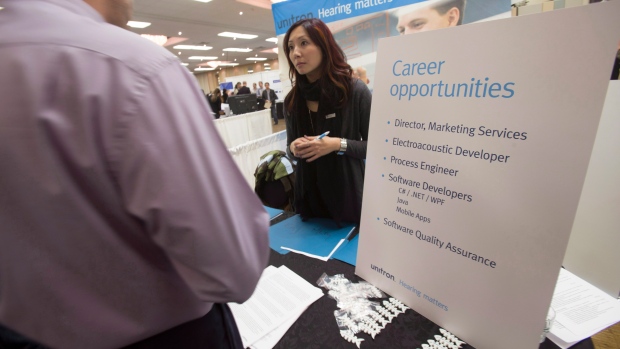 OTTAWA -- The country's labour market beat expectations yet again last month to help wash away some of the lingering doubts the Bank of Canada will raise its benchmark interest rate next week.

The latest instalment of encouraging job numbers came amid widespread speculation that the Bank of Canada will start hiking its rate from 0.5 per cent next Wednesday.

The vast majority of the 45,300 jobs added in June were in part-time work, although the number of full-time positions also rose, Statistics Canada said Friday.

The fresh data, which added to a series of positive job gains over the last year, nudged the national unemployment rate down to 6.5 per cent from 6.6 per cent the previous month.

Central bank governor Stephen Poloz has been sending signals in recent weeks and has made increasingly positive statements about the state of the economy.

Do you see any reason for the Bank of Canada not to raise rates next week?

Before the jobs report Friday, many analysts were already predicting the bank to raise its key interest rate target next week for the first time in seven years.

For at least one hold out, the jobs figures were a turning point.

"We had held on to our October forecast for a Bank of Canada rate hike, but concede that's likely to end up off the mark, as today's jobs numbers cement the case for the central bankers to raise rates in the coming week," CIBC chief economist Avery Shenfeld wrote in a note to clients.

"In sum, the jobs market is tightening, and not that far from what historically has been judged as full employment.

"Over to you, governor Poloz."

Jean predicts the bank to lift the rate at its scheduled announcement next week and hike it again in October to reverse two cuts introduced in 2015.

Last month, Poloz said those 2015 rate cuts had done their job of helping the broader Canadian economy counteract the effects of the oil-price slump, which began in late 2014.

At this point, Jean said it would be a "shocker" if Poloz didn't raise the rate. He added that the bank's role is to remain fairly predictable.

"If that principle of predictability and sound communication, if that gets violated, then it just plants the seed for the market not buying into future communications," he said.

"It would be, certainly, a pretty unhealthy precedent, So, I don't think Mr. Poloz will want to play that game."

The monthly jobs report is viewed by markets as a key piece of information about the economy's overall health.

The June labour force survey showed that Canada added 37,100 part-time jobs, while the rest of the gain was in full-time work. This followed a surge of 77,000 new full-time positions in May.

The number of private-sector employees increased by 17,800 last month, while the public sector gained 6,000 positions. 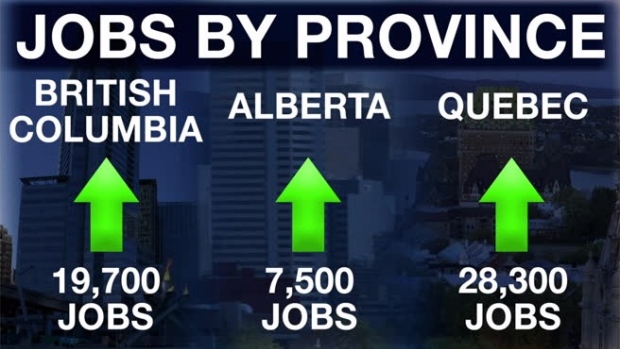 The June employment gains were largely concentrated in Quebec and British Columbia, which saw the biggest increases among the provinces. Quebec gained 28,300 jobs and its unemployment rate held at six per cent -- its lowest level on record since 1976.

Alberta, which has been hit hard by the collapse in oil prices, added 7,500 positions last month and its jobless rate dropped to 7.4 per cent from 7.8 per cent the previous month.

Across the country, both the goods-producing and services sectors added jobs. The goods sector added 16,000 jobs, mostly in agriculture, while the services sector added 29,200 positions, thanks to a large employment boost in professional, scientific and technical services.

Hourly wages for all employees grew 1.3 per cent year-over-year in June, matching the same increase reported for May, the agency said. The number of hours worked last month increased 1.4 per cent, up from a 0.7 per cent gain in May, it added.

Economists had expected an increase of 10,000 jobs in June and for the unemployment rate to stay at 6.6 per cent, according to Thomson Reuters. 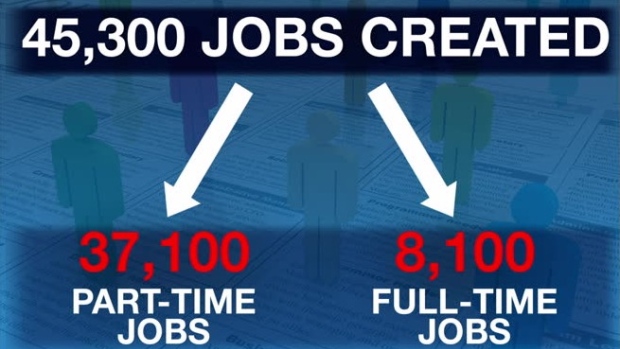 A quick look at June employment (previous month in brackets):