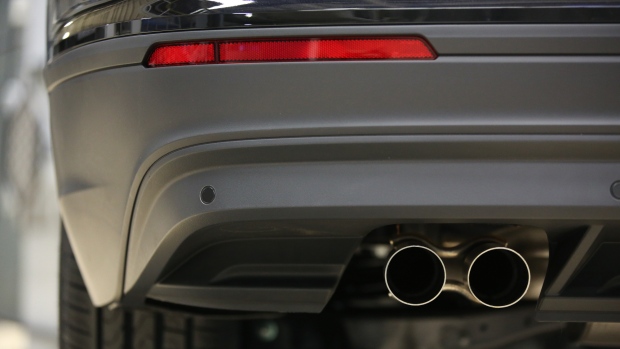 Exhaust pipes hang from the underside of a VW Tiguan automobile at the end of the production line at the Volkswagen Group Rus OOO plant in Kaluga, Russia, on Tuesday, Sept. 19, 2017. VW's return from debt market exile following its 2015 diesel emissions scandal has helped propel European bond sales past 1 trillion euros ($1.2 trillion) one month earlier than in 2016. , Bloomberg

OTTAWA -- The Canadian government said Monday that it is charging Volkswagen for importing cars into Canada that company executives knew violated emissions standards.

The German automaker faces 58 charges of violating the Canadian Environmental Protection Act for bringing 128,000 cars into Canada with illegal emissions between 2008 and 2015. The company faces two other charges of providing misleading information.

Volkswagen issued a statement saying that it has co-operated fully with Canadian investigators and that a deal is prepared ahead of the company's first court appearance in Toronto on Friday.

Environment Canada officials published notice of the charges Monday, but said they would not comment further because the matter is before the courts.

Canada's case against Volkswagen comes more than four years after the company admitted to installing software on 11 million cars worldwide to trick emissions-testing equipment into concluding the cars ran more cleanly than they actually did.

Volkswagen pleaded guilty to charges in the case in the United States in March 2017 and was fined more than $4.3 billion.

Several Volkswagen executives and managers involved in the deception were charged in the U.S. and Germany, and some have already been sent to prison.

In total, the elaborate scheme has cost the company more than $30 billion in legal fines and civic lawsuits as well as compensation to customers who returned affected cars for refunds or exchanges.

Environment Canada's investigation, launched in September 2015, was repeatedly criticized by environmental experts and lawyers for taking too long.