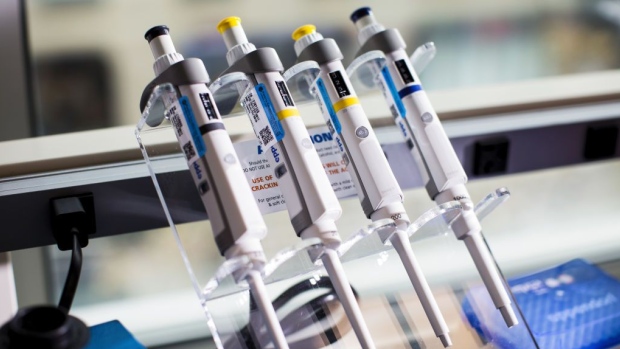 Pipettes are seen at the Moderna Therapeutics Inc. lab in Cambridge, Massachusetts, U.S., on Tuesday, Nov. 14, 2017. Moderna this week started testing a personalized treatment that teaches the body how to fight cancer. Photographer: Bloomberg/Bloomberg , Bloomberg

OTTAWA - Canada edged towards a new milestone in COVID-19 cases Friday as accelerating infections had Prime Minister Justin Trudeau noting numbers are “too high,” especially in Alberta “where the numbers are rising alarmingly.”

Additions to the daily tally brought the nation to nearly 400,000 reported cases by Friday morning, including 1,780 new cases in Ontario, 1,345 in Quebec, eight in New Brunswick and eight in Nunavut.

Trudeau warned of increasing strain on hospitals and health-care workers, and urged Canadians to remain vigilant in public health care measures that he acknowledged will make for a difficult holiday season.

Ontario Health Minister Christine Elliott said spread had “hit a critical point” in her province, where there are 633 new cases in Toronto, 433 in Peel and 152 in York Region, and 25 more deaths linked to the virus.

In Quebec, there are 1,345 new cases and 28 additional deaths, including five deaths that occurred in the past 24 hours.