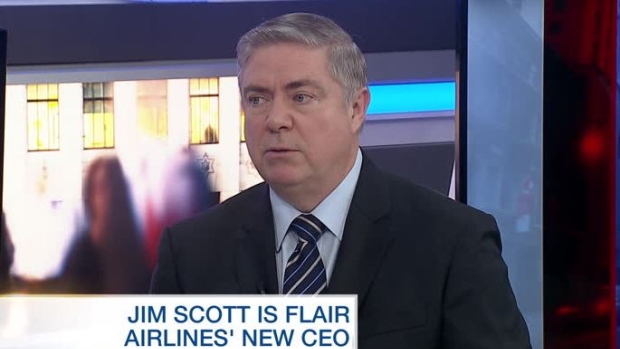 KELOWNA, B.C. -- The founder of Canada Jetlines is taking over as chief executive of Canadian discount carrier Flair Airlines Ltd.

Jim Scott replaces Flair founder and former president Jim Rogers, who will remain an adviser until 2019 after selling his shares in the Kelowna-based company.

Scott is a former airline pilot who led Canada Jetlines between 2012 and last year.

He will be joined by Jerry Presley, who represents the majority owners, as executive chairman. He was previously an adviser to Canada Jetlines.

Flair Airlines currently flies from seven Canadian cities: Toronto, Hamilton, Winnipeg, Edmonton, Abbotsford, Kelowna and Vancouver. It has plans to soon announce an expansion of its fleet and route network.

The airline faces the prospect of competition with the launch next summer of WestJet's discount Swoop airline and Canada Jetlines.

Flair operates seven aircraft and plans to add two Boeing 737-800 aircraft later in 2018. Four more planes are slated to be added to the fleet in 2019 to accommodate nearly 1.5 million passengers.