Why Canada's economic productivity could be better than expected post-COVID

Exports of goods increased by just 0.5 per cent in November, after jumping 2.2 per cent in October and 1 per cent in September, Statistics Canada said Tuesday in Ottawa. Imports fell for the first time since May, dropping 0.3 per cent in a sign of sluggish demand at home.

That leaves total trade stalled at about 98.5 per cent of pre-pandemic levels just as the nation’s economy entered what many economists warn may be another contraction in December and possibly the first three months of 2021. In addition to slowing global growth, exports have been hampered by a stronger Canadian dollar, with the so-called loonie gaining more than 4 per cent against the U.S. dollar over the past three months.

“The Bank of Canada will be concerned with how much of a headwind the loonie’s appreciation is to the competitiveness of the country’s exports,” Royce Mendes, an economist at Canadian Imperial Bank of Commerce, said in a report to investors. 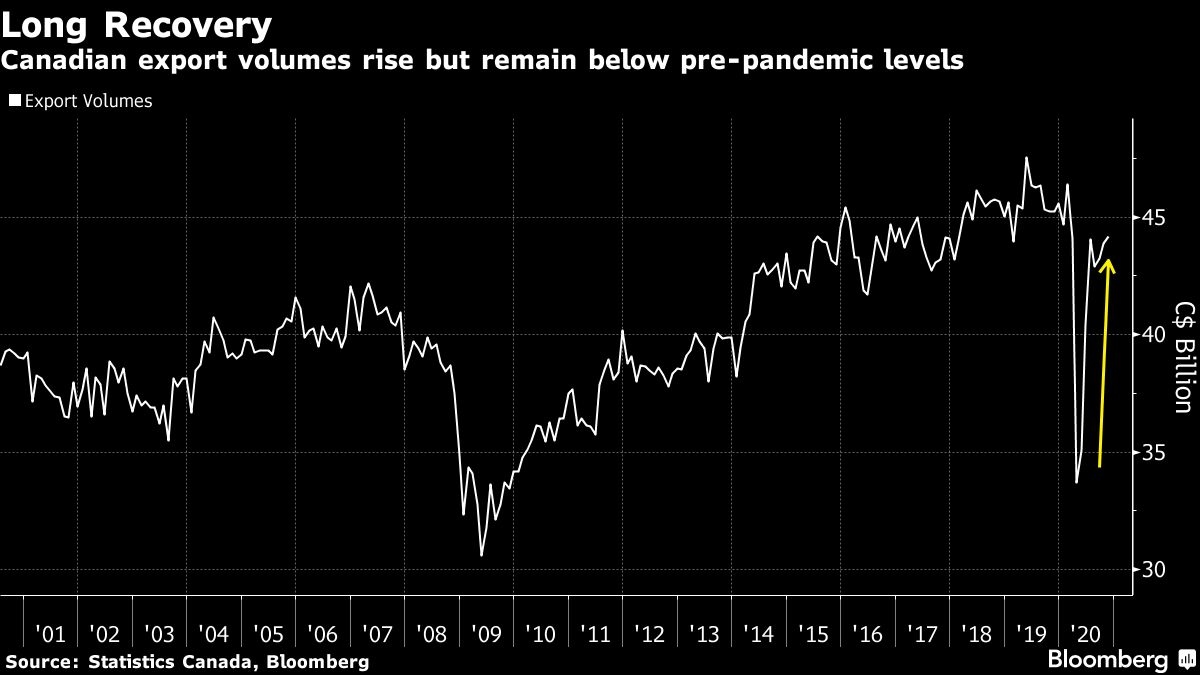 The country’s trade deficit was $3.3 billion in November, from a revised $3.7 billion in October, Statistics Canada reported Thursday in Ottawa. Economists had predicted a gap of $3.5, according to the median of 11 forecasts in a Bloomberg survey.

Canada is on track to post a record merchandise trade deficit in 2020, with the cumulative gap already at $33.4 billion in the first 11 months of the year. That’s largely because the collapse in exports earlier this year outpaced the drop in imports amid weakness in key sectors like oil. Imports, meanwhile, have recovered more quickly during the recovery.

The end result is exports are still below pre-pandemic levels while imports have fully rebounded.

However, services trade, near balance for the first time on record, is fully offsetting the deterioration in Canada’s merchandise trade balance. Until the pandemic, Canada had run massive deficits in services trade, largely due to foreign travel.