Things are looking up in the second half of 2017 for the TSX, according to National Bank.

The bank’s Chief Economist Stephane Marion told BNN on Thursday that there’s plenty of reason to be bullish on Canada for the rest of the year.

“We saw the beginning of a reflation trade at the end of [last] year, but it petered out. My view is that it should come back in the second half of the year, so if there’s one market that I like now, it’s Canada’s,” Marion told BNN.

“The valuations relative to the U.S. are quite attractive. We haven’t been this cheap to the U.S. since 2004… I don’t see much risk because I think the Canadian economy has good momentum going into the second half that will support the banking sector and I think the global economy does well, so that should help commodity prices and the energy sector.”

Marion’s comments come one day after he wrote a note to investors promoting a long stance on the Toronto Stock Exchange, suggesting that ‘the domestic economy remains sound’ and that the heavyweight sectors – including energy and financials – will rebound. 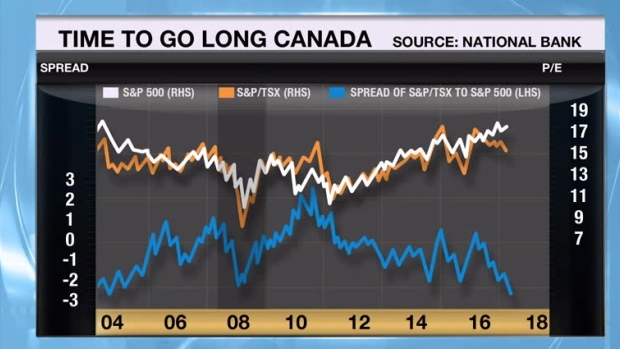 In another note to investors on Wednesday, Marion said a Bank of Canada interest rate hike for next month is ‘in the bag.’ This came the same day Bank of Canada governor Stephen Poloz doubled down Thursday on his opinion that lower rates have ‘done their job.’

“A rate hike by the Bank of Canada on July 12 appears to be a foregone conclusion (it would take a disastrous jobs report on July 7 to prevent such a move),” Marion wrote.

“My view is that we are miles away from restrictive monetary policy. I think we have to bring rates a little bit closer to inflation, which would still be rates that are very, very low on a historical basis,” he said.