Canada’s economy shrank the most since the 2008-09 financial crisis, marking the beginning of what’s expected to be the deepest contraction of the post-war era.

Gross domestic product dropped at an annualized 8.2 per cent in the first three months of the year, Statistics Canada said Friday in Ottawa. Economists had anticipated a 10 per cent decline. The agency also released preliminary estimates for April that show an 11 per cent plunge in output, versus the 7.2 per cent drop in March when coronavirus restrictions were first imposed halfway through the month.

As bad as the numbers are, the better-than-expected data suggest the country may be able to avoid the most dire scenarios, helped by a flood of government transfers into the economy.

“Overall, the economy has likely troughed at least for now, with businesses beginning to reopen,” Royce Mendes, an economist at Canadian Imperial Bank of Commerce, said in a report to investors. “Look for the economic data to begin showing signs of revival over the summer months, even if it only represents the low-hanging fruit of eased restrictions.” 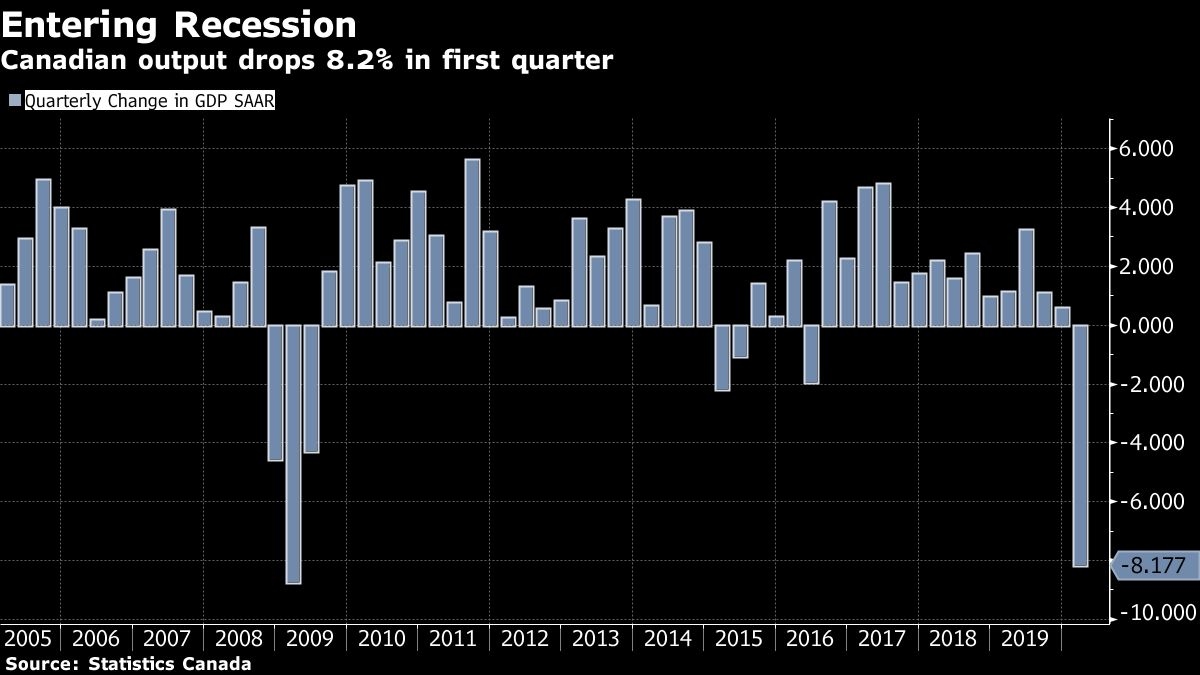 The second quarter likely won’t be worse than the 40 per cent annualized decline that CIBC is forecasting, Mendes said.

According to Bank of Montreal’s Doug Porter, Canada’s first quarter contraction is right in the middle of the pack among Group of Seven countries, better than all three Eurozone countries but worse than the U.S., Japan and the U.K.

“The new news here is that the figures were a little less dire than feared,” Porter said in a report.

The historic decline in the first half of 2020 has been anticipated. The focus is shifting to how quickly and to what extent the economy will recover. Most economists expect a slow recovery as long as consumers remain hesitant to resume normal activities, at least until a vaccine is available.

The Canadian dollar was little changed after the report, trading at $1.3768 against the U.S. dollar at 9:12 a.m. in Toronto trading. Two-year government bond yields dropped 2 basis points to 0.29 per cent.

The pullback from the consumer was also evident in a surge in the savings rate to 6.1 per cent in the fourth quarter. That’s the highest since 2001.

Even though hundreds of thousands of Canadians lost jobs in the first quarter, household disposable income was up, reflecting an increase in government transfers. Canadians didn’t spend those transfers however, putting them toward savings.