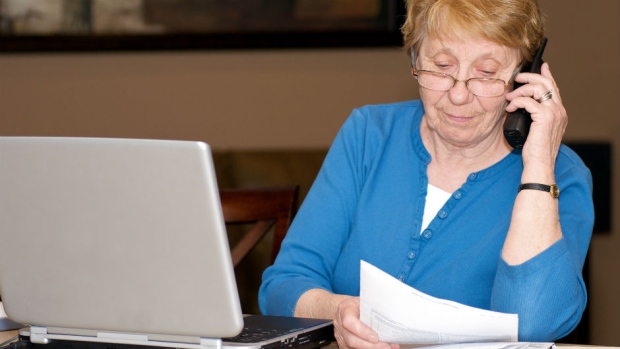 TORONTO -- Unlike many Canadian seniors, May Chan overcame her fears about banking online even before COVID-19 struck the country.

The retired Burnaby, B.C., teacher says her bank guided her through her worries about security, a common concern for digital neophytes in light of data breaches that have struck several financial institutions and companies like Equifax and LifeLabs.

"The older generation, we don't really understand how hackers work," she said in an interview.

Banks and companies that offer online services say customers can take some simple steps to protect themselves.

They include selecting strong and safe passwords that are unique for banking and avoiding public Wi-Fi for banking.

"You're not using the same password for everything, you're not storing it someplace unsafe and you change your password relatively frequently," says Mikael Castaldo, senior business manager at Ratehub.ca, an online one-stop shop for all financial products.

One benefit of digital banking is its eliminates the need to print records since they can be easily searched online.

Chan says she can't believe how convenient it has been to keep on top of her finances since signing up for digital services at CIBC.

"It's really been really convenient and it saves me time. I don't have to run back and forth to the bank," she said, adding that she's grateful not to have to line up at the bank and risk getting sick.

That's particularly important to seniors, who have been highly susceptible to catching the virus.

Seniors flocked online with CIBC reporting a 250 per cent increase in sign-ups by customers over the age of 65 in April.

"The largest digital adoption rate increase that we saw was in our clients that were actually over the age of 80," said Laura Dottori-Attanasio who heads CIBC's personal and business banking group.

But younger folks have also joined for the first time or increased their usage as banks developed or enhanced their mobile technology.

Overall registrations for CIBC mobile banking have increased 45 per cent since COVID forced widespread shutdowns across the country, while digital transactions grew 25.7 per cent, e-transfers rose 41.9 per cent, e-deposits 26.4 per cent and bill payments 18 per cent.

The Canadian bank industry has spent heavily to improve their digital footprints, in part to reduce labour costs.

"Effectively four to five years worth of organic digitization effort has happened in four months in terms of servicing," he said in an interview.

The bank says 400,000 clients digitally activated for the first time since COVID, including one-third who were very frequent or branch-only users.

The change has also seen the number of customers using video conferencing surge, aided by an RBC app that uses a secure link and verifies the person's identity through a scan of a passport or driver's licence and a selfie photo.

It also launched a multilingual chatbot during COVID that has increased the amount of time customers spend on the app.

"It feels like COVID has dramatically accelerated the utilization of those sorts of tools and assets," he said.

While some see the shift to digital as permanent, Tilton wonders how many customers will shift back to traditional channels once the virus ends.

"I wouldn't presume anything," he said, noting that people have strong habits that developed for years before COVID.

"If it goes another two years or another year then you'd think that change is kind of sticky but if we're finished next month, which seems unlikely, then we're probably more likely to go back to pre-COVID or some pre-COVID type of behaviour."

"I think what the pandemic has highlighted is a different way that business has to be done," he said noting that lower fees is a key driver of customer interest in its services.

"So you're realizing some pretty significant fee savings that really compound over time and so it certainly makes a digital option worth exploring for anyone. But you also get higher transparency and access to human advice."