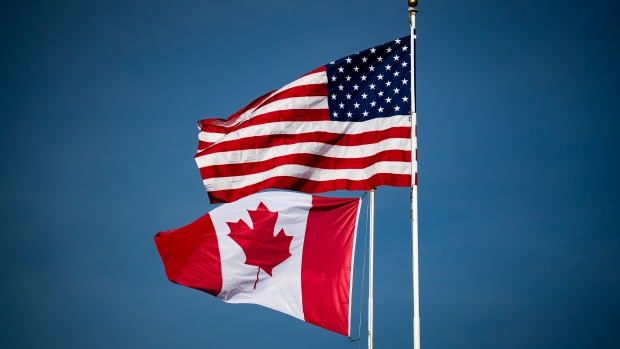 Canadian and U.S. flags fly atop the Peace Arch monument at the Douglas-Peace Arch border crossing in Surrey, B.C., on Monday, November 8, 2021. , THE CANADIAN PRESS/Darryl Dyck

“No place like home” has become “anywhere but here” for Canadian investment portfolios.

According to Statistics Canada, Canadians pumped $17.5 billion into foreign securities last November compared to $5.4 billion in October - drastically accelerating a trend that has seen investment dollars flow out of the country since the onset of the pandemic.

The bulk of those Canadian dollars - $7.4 billion - went toward purchases of U.S. shares with a focus on big technology companies, and funds that track broad market indices such as the benchmark S&P 500.

The massive flow of foreign investments were made by Canadian businesses, governments and big institutional investors, but also include individual retail investors either directly or through pensions, mutual funds or exchange-traded funds (ETFs).

In the first 11 months of 2021, Canadians spent a record high $82 billion on U.S. securities, and it appears to have paid off. Last year, the S&P 500 advanced 27 per cent compared with a more modest 22 per cent gain for Canada’s benchmark S&P/TSX Composite Index. The difference was even more stark in 2020 when the S&P 500 posted a 16 per cent gain and the TSX eked out a 2.2 per cent return after the energy sector cratered.

The advantage of investing outside Canada is nothing new to many long-term investors. Factoring total returns over the past 20 years, the S&P 500 has surged in value by 516 per cent, compared with the TSX’s 372 per cent climb. That translates into an average annual compounded rate of return of 9.5 per cent for the S&P 500 versus eight per cent for the TSX.

The trend toward investing abroad is a positive sign for Canadian investment portfolios notoriously tethered to a home bias. Investment savings tend to be heavily skewed toward Canadian publicly traded equities despite the fact that they account for less than three per cent of global equities. Of that three per cent, roughly two-thirds are directly tied to the resource or financial sectors, which proved to be devastating when the energy sector tanked in 2020.

Global diversification can hedge that sort of risk and expose an investment portfolio to a wide variety of opportunities in sectors and geographic regions within the remaining 97 per cent of the global equity market.

At the same time, a relatively strong Canadian dollar is giving Canadian investors more buying power on international markets. With the loonie near 80 cents to the U.S. dollar, Canadians who beefed up U.S. denominated accounts in their registered retirement savings plans (RRSP) and tax-free savings accounts (TFSA) to purchase foreign equities can expect them to hold their value if the loonie heads below 70 cents as it did at the onset of the pandemic.

Most Canadian trading accounts have easy access to buying U.S.-listed stocks directly, which can also provide exposure to the rest of the world since the U.S. dollar is the global standard. Roughly 50 per cent of all publicly traded companies in the world are based in the United States and many operate on a global level. That not only gives investors in U.S. stocks a global reach, but it also puts the onus on the company to hedge all other foreign currencies.

Investing directly in markets outside of Canada and the U.S. can be difficult and expensive for the average investor when you take fees into account, but there are ways.

Most Canadian mutual fund providers offer unhedged U.S. dollar versions of foreign equity funds. You can invest in a broad global fund (all countries) or international fund (all countries minus Canada and the U.S.), or funds that concentrate on specific countries or regions, or global sectors like technology.

Many foreign equity funds are actively managed by investment teams with vast research capabilities and experience in the focus area. Some funds are sub-managed by firms located in the specific geographic region.

Annual fees for that sort of reach and expertise can be up to three per cent of the total amount invested, which is ultimately drawn from the total return.

ETFs generally have the same reach as mutual funds in terms of geographic regions and global sectors. The big difference is they are passively managed. That means holdings are bought and sold according to a preset formula such as market weighting on the underlying index. ETFs are not as effective as mutual funds at adjusting to changes or nuances relating to specific foreign markets.

On the plus side, fees on unhedged foreign ETFs are usually much lower than mutual funds; often below 0.05 per cent on the amount invested annually.

While the vast majority of equities are listed outside Canada, the proper mix of Canadian and foreign equities in a typical Canadian investment portfolio depends on the individual investor. As a general rule, Canadians should have a large portion of Canadian assets because that’s where they live and spend a great deal of their retirements. Canadians who spend a lot of time abroad should have a larger portion of their portfolios in U.S. dollar investments.

A qualified investment adviser should be able to help determine the right mix for your portfolio.