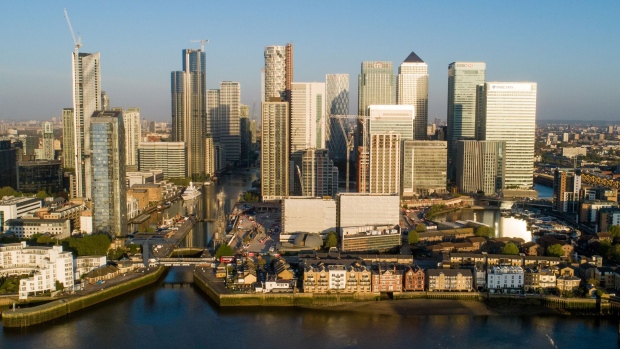 (Bloomberg) -- The main landlord in London’s Canary Wharf financial district is considering scrapping plans for a new office skyscraper and building a 60-story apartment tower instead.

Canary Wharf Group is consulting with local authorities about the potential for building around 700 homes at its 1 Park Place site that would be purpose-built for tenants, according to an application on the Tower Hamlets council website. The firm had won initial permission in 2015 for a one million square foot office building, the equivalent of two Gherkin skyscrapers.

The reason for the potential switch to apartments wasn’t disclosed in the document. A spokesperson for Canary Wharf declined to comment.

The pandemic has hammered London’s commercial landlords, who have grappled with plunging rent collections and the ongoing uncertainty about whether white collar workers will return to the office en masse. Canary Wharf is facing a fall by as much as 15% in advertised office rents through 2021, the steepest throughout London, according to a forecast by broker Carter Jonas.

Focusing on rental homes, however, looks an increasingly safe bet as a housing shortage across the capital fuels demand for accommodation. DWS, the investment arm of Deutsche Bank AG, last month made its first acquisition in the U.K. build-to-rent sector with a development in South London, citing a lack of supply of good quality and affordable rental housing in the area.

Even before the pandemic, financial firms were reconsidering their real estate needs. HSBC Holdings Plc, which has its headquarters in Canary Wharf, said it expected to slash its global property footprint by 40%. So far, initial steps to ease lockdown restrictions haven’t led to a rush back to the office: occupancy levels across the U.K. are around 30% this week, according to building software company Metrikus.

Still, a flurry of building approvals and recent leasings in the City of London, Canary’s long-time rival district, suggest that there is still high demand for new offices in the capital. British Land Co. on Thursday said it had leased almost 30% of its planned 1 Broadgate redevelopment to Jones Lang LaSalle Inc. -- four years before the project’s planned completion.

The Docklands area around Canary Wharf has staged a residential building boom in the past five years, with the construction of luxury apartment towers targeting young finance workers. Around 9% of new homes under construction across London at the end of last year were in the area’s E14 postcode, according to data company Molior.

The news about Park Place was earlier reported by Estates Gazette.