Canopy Growth is moving further into Europe after signing a $342.9 million deal to buy C3 Cannabinoid Compound, a German company that specializes in cannabinoid-based medical therapies used by European physicians. The company’s main medicinal offering is dronabinol, a compound with standardized concentrations of THC, the main psychoactive compound in cannabis. Canopy’s move into Germany comes amid a flurry of pot-related activity in the European country. Last month, Aurora Cannabis and Aphria were among the three companies selected by the German government to cultivate and distribute medical pot in the European country.

Canada may have a fairly fragmented cannabis retail sector with numerous retailers vying for market share amid the early days of legalization. Fire and Flower is starting to consolidate the space after announcing it acquired four Saskatchewan-based outlets for $13 million in cash and stock. Fire and Flower is buying the operations of Prairie Sky Cannabis, which has stores in North Battleford, Estevan, Martensville and Moosomin under the name Jimmy's Cannabis Shop. The acquisition strengthens the retailer’s brand presence in Saskatchewan, Fire and Flower said in a release on Thursday. Fire and Flower announced early last year that it was moving its headquarters to Edmonton, with plans to open 30 stores in Alberta.

Cura’s sale to Curaleaf for $1.27B comes amid a controversial past

Cura Cannabis Solutions was in the news on Wednesday after selling its Select Oil unit to Curaleaf for $1.27 billion, but it’s just one piece of a much larger story that includes allegations of fraud and years of lawsuits. The Oregonian reports that Cura’s tale is one with many twists that begins at Iris Capital Management, a notorious real estate scandal that earned the man who founded both the cannabis company and Iris a three-year sentence in federal prison. The backstory also details how nearly 50 Oregon retirees lost $1 million in retirement savings in the real estate scam that birthed Cura.

Shares of CannTrust tumbled on Thursday, falling as much as 14 per cent on the New York Stock Exchange after investors soured on the Canadian pot company’s plans to issue an equity offering at US$5.50 a share. That’s 23 per cent below its closing price on April 18, the session before the offering was announced, and 54 per cent below its high on Oct. 16. The offering comes amid CannTrust tying up with a group of big U.S. banks including Bank of America Merrill Lynch, Citigroup, Credit Suisse Securities and RBC Capital Markets who were looking to raise US$170 million before expenses. That marked the first time a major U.S. bank has led an equity offering in the pot space.

18%
-- The amount of Canadians, roughly 5.3 million, who used cannabis in the first three months of the year, according to Statistics Canada. That’s up from 14 per cent in the same period a year earlier. 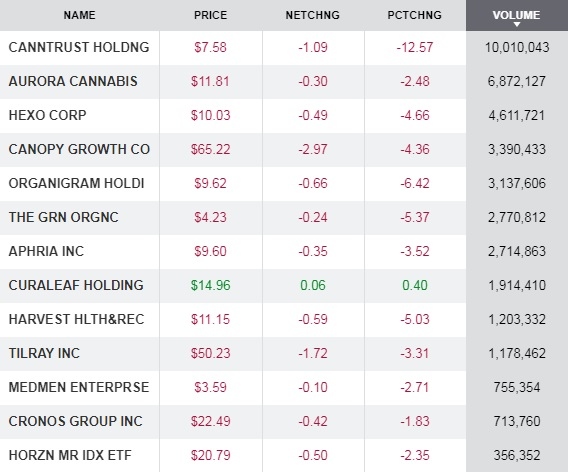