Pot firms look to grow outdoors ahead of edibles

Pot is quickly becoming a significant part of the Canadian economy, according to Statistics Canada. The country’s national statistics agency said Friday that annualized Canadian household spending on cannabis totalled $5.9 billion in the fourth quarter. The black market accounted for $4.7 billion of that figure – or nearly 80 per cent – while the legal market is estimated at $1.2 billion. StatsCan added that cannabis accounted for 0.5 per cent of total household spending in the fourth quarter, while non-medical cannabis accounted for 11.2 per cent of Canadian household spending on alcohol, tobacco and cannabis. The black market accounts for about 71 per cent of recreational cannabis sales this year, but will fall to 37 per cent in 2020, according to a recent report from the Bank of Nova Scotia.

Outdoor cannabis could be the next big Canadian agricultural crop as dozens of pot firms applied to produce cannabis in farm fields across the country. Health Canada received 172 site applications as of Jan. 31 from licensed cannabis producers who intend to use an outdoor area for cultivation or other purposes, including for destruction or composting. At this time, no companies have been authorized to grow cannabis in an outdoor area, Health Canada said. The application count comes as 48North Cannabis Corp. secured what is believed to be the first supply deal for outdoor cannabis when it committed 1,200 kilograms to Quebec from its farm in Brant County, Ont. by the end of the year. Other major cannabis producers making outdoor cannabis plans include Aleafia Health and CannTrust, as the firms prepare for  anticipated demand in the upcoming pot-infused edibles market.

Canopy Growth is partnering with the NHL Alumni Association to finance one or more studies on whether cannabinoids might help to wean former players off of addictive opioids, according to TSN’s Rick Westhead. The medical study, conducted in a double-blind randomized method, will involve about 100 former players in the Toronto area and could be an important step towards establishing the first comprehensive snapshot of the health of retired hockey players. Of the 100 players anticipated to participate in the study, 20 would be given a placebo and 80 would receive CBD pills to be taken twice daily over 10 weeks. The study is scheduled to take a year to produce reportable results.

Village Farms International announced Friday it formed a joint venture with Georgia-based Nature Crisp, a privately-owned farming operation, for the outdoor cultivation of high-cannabidiol hemp and CBD extraction in multiple states throughout the United States. The joint venture will be called Village Fields Hemp with Village Farms owning a 65 per cent stake, while Nature Crisp will control the remaining 35 per cent. While the joint venture is still determining locations to establish its hemp cultivation and CBD-extraction operations, it expects to have 500 to 1,000 acres in production in 2019.

Great-West Life said it is expanding its coverage of medical cannabis, including a new agreement with Shoppers Drug Mart to deliver medical-grade cannabis to patients. Great-West, which has offered medical cannabis coverage through healthcare spending accounts since 2009, now includes medical cannabis under its pay-direct drug plan, which represents the vast majority of all of the insurers’ drug plans. That means that patients with a valid medical subscription can now be immediately reimbursed for their cannabis prescriptions.

$6.87
– The price of a gram of cannabis in Canada, up 5.6 per cent from the prior week, according to the Cannabis Benchmark’s Cannabis Spot Index. This comes after edging down to the $6 per gram mark only two weeks ago and equates to US$2,363 per pound at current exchange rates. 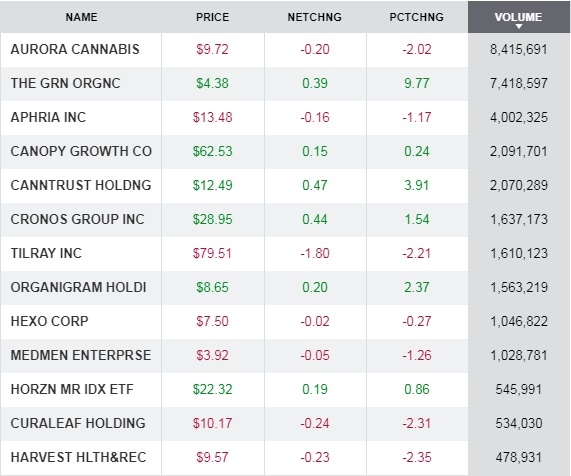