Although one cannabis producer finally got the green light to begin growing its pot outdoors, the clock is ticking for dozens of other companies waiting for Health Canada to approve pending applications. As of May 9, Good Buds on Salt Spring Island, B.C., was the first producer to be awarded a production licence that includes outdoor cultivation. Many companies are banking is cheaper than growing pot in a greenhouse or indoor facility. But for the many other licensed producers still in the queue – which is believed to be north of 190 applicants - the window is closing for them to get their plants in the ground and produce an ample harvest by the fall. Good Buds plans for up to 100,000 plants starting in June.

SOL Global Investments is adding another U.S. state to its expanding cannabis operations. The company, run in part by controversial cannabis investor Andy DeFrancesco, said it will purchase ECD Inc., a California-based cannabis operator for US$120 million. The deal includes six licensed dispensary companies in California that operate under the nationally recognized "One Plant" brand; a retailer that SOL Global intends to open in Florida and Michigan alongside its 3 Boys Farms and MCP Wellness subsidiaries, respectively. Once the deal for the California operations closes, SOL Global intends to spin out the cannabis operator into a separate company “by way of an initial public offering, reverse takeover, plan of arrangement or other similar transaction.”

The Supreme Cannabis Company is buying Blissco Cannabis in an all-stock deal valued at $48 million. Under the agreement, each Blissco Share will be exchanged for 0.24 of a Supreme common share, the company said in a release on Thursday. Based in Langley, B.C., Blissco operates a 18,000-square-foot production facility and has been producing cannabis oils since receiving its production licence in August 2018. As part of the deal, Blissco CEO Damian Kettlewell will continue to lead Blissco and has committed to remaining employed at Supreme Cannabis as well as retaining at least 75 per cent of his shares for a minimum of two years.

A bill that would allow cannabis companies in California to receive banking services is set to be determined as a key hearing is scheduled to take place later on Thursday. The legislation would allow private banks or credit unions to apply to the state for a special charter so they can provide depository services to licensed cannabis businesses. Pot-related businesses usually deal in cash due to continued federal banking restrictions, despite efforts made in U.S. Congress to pass a bill that would allow banks to serve such businesses without the risk of being prosecuted.

$89 million
- The amount spent by Green Growth Brands to repurchase more than 27 million of its common shares, the company announced Thursday. 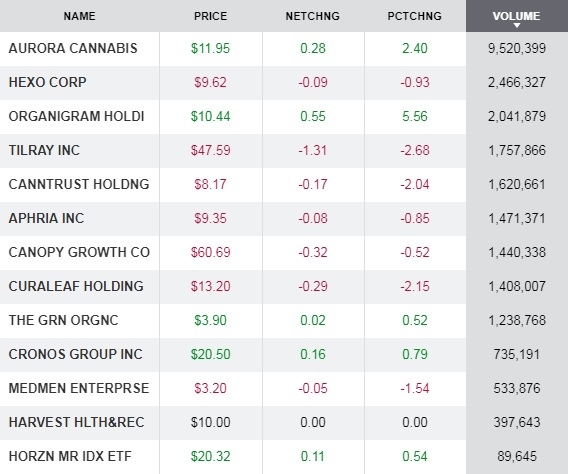