StatsCan in talks with provinces to improve cannabis data

Statistics Canada is in talks with provincial regulators to obtain up-to-date information from cannabis retailers that would provide highly accurate sales data for the legal marijuana sector. James Tebrake, assistant chief statistician for economic statistics at Statistics Canada, told BNN Bloomberg on Wednesday that the statistics agency plans to obtain the level of granular data for the cannabis sector that it already receives for some food items when it compiles its monthly inflation figures. The move from StatsCan would greatly enhance the level of accuracy of how popular certain segments of the cannabis market is and how it can better plan and market those items.

Cronos Group shares soared on Wednesday after Bank of America Merrill Lynch raised its rating on the stock to buy from underperform, which had been based on valuation. Cronos CEO Mike Gorenstein told a group of Wall Street analysts and executives on Tuesday that the Canadian cannabis company will be “aggressive” regarding a U.S. CBD launch. Gorenstein said he’s not talking “that long of a way out” regarding the company’s entry into the U.S. market. Bank of America Merrill Lynch added in its research note that Cronos’ partnership with Altria Group Inc., which also owns 45 per cent of Cronos, is “key to winning the U.S.”

Canada’s legalization of pot edibles later this year is facing an even more shambolic start than the dried flower market, which is still struggling to meet demand, according to industry players, Bloomberg reports. Canada will add edibles, extracts and topicals to the list of legal cannabis products no later than Oct. 17. Many analysts agree these products will generate better demand and margins than dried flower. But the Canadian government has not issued regulations for the new formats yet, making it difficult for producers to prepare. Many pot companies are stockpiling, choosing to forgo revenue today to ensure they have enough supply for the new high-value products. This is exacerbating the shortage of dried flower, but executives say it’s worth it.

“It’s going to be years to significantly reduce the illicit market.”
-- Beau Kilmer, co-director at RAND Drug Policy Research Center, on how long it will take to eradicate the black market. 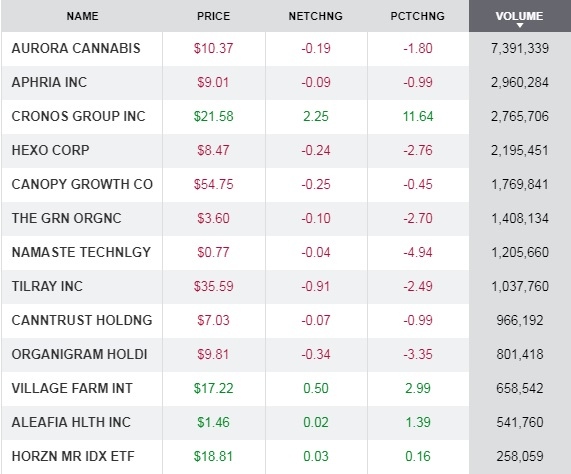