Unilever is dipping its toe into the cannabis space with one of its subsidiaries launching a CBD-infused product Tuesday. The move that signals a growing acceptance among major consumer packaged goods companies to join the fast-moving marijuana market. Schmidt’s Naturals, which was acquired by Unilever in December 2017 for an undisclosed sum, plans to release deodorant products that will infuse either hemp or cannabidiol as a key ingredient later this year. Now, with Unilever entering the cannabis space, the floodgates could be set to open for other major consumer goods companies to offer similar pot-related products
province.

The bloom may be coming off the cannabis flower in Canada after one research firm cut its outlook estimates on the country’s burgeoning pot market. Cannabis industry research firm BDS Analytics said Canada’s pot market is expected to grow to US$5.2 billion by 2024 up from US$569 million last year. That’s revised lower from the firm’s previous January forecast, which predicted the Canadian market would hit US$5.9 billion by 2022. BDS attributes the reduced forecast to limited physical retail distribution, a complex supply chain, low availability of “non-flower” products and an increasingly active illicit market that continues to flourish in the country.

Harvest Health & Recreation, fresh off its acquisition of Verano Holdings, isn’t sitting still in the M&A space. The Phoenix-based company announced it will acquire CannaPharmacy for an undisclosed sum, a deal that will add cannabis licences in Pennsylvania, Delaware, New Jersey, and Maryland to Harvest’s U.S.-wide portfolio. Once the deal closes, Harvest will hold licenses that allow it to operate up to 213 facilities, including 130 retail dispensaries across the U.S. Harvest expects that the transaction will be accretive to its 2020 revenue and EBITDA, the company said in a release.

TGOD not yet ready to start building out its Hamilton greenhouse, city officials say

The Green Organic Dutchman continues to fight city hall over its greenhouse, which is under construction near Hamilton, Ont. The Hamilton Spectator reports that the company told investors on its website that a settlement to build the facility was accepted and that growing should begin by June. However, city officials said the finalized conditions for the proposed settlement were only being formally delivered to the company and have yet to be accepted. The new terms apparently include items designed "to protect neighbours" from unspecified "potential negative impacts" related to expanding pot production. TGOD said the greenhouse, once complete, will be able to produce 17,500 kilograms of organic cannabis annually.

While there’s been some M&A activity amongst pot producers, the retail side has been somewhat dormant – until now. Wildflower Brands announced Tuesday it signed a letter of intent to acquire City Cannabis, a B.C.-based cannabis retailer that holds two of the three licences to sell legal pot in Vancouver. Once the deal closes, City Cannabis's founder and CEO Krystian Wetulani, will join Wildflower as a director and as the newly-merged company’s chief development officer. City Cannabis reported year-end results with $7.7 million in revenue and a gross profit of $3.4 million.

$41.5 million
- How much Ascent Industries received for its assets and certain liabilities from BZAM Management, the company said late Monday. The deal comes after Ascent applied for creditor protection under the Companies' Creditors Arrangement Act last month. 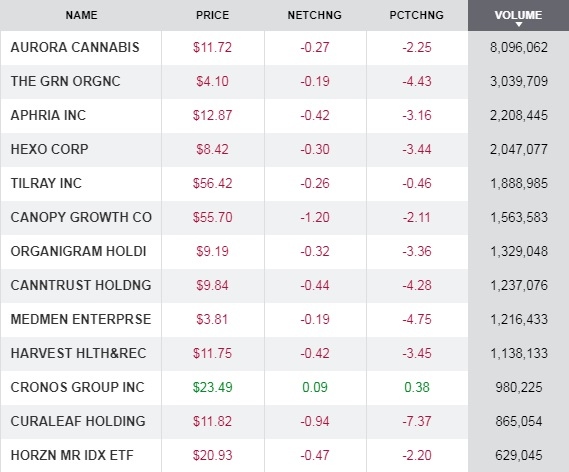