Canadian cannabis cultivator PharmHouse is the latest pot-related company to be granted creditor protection, a move that will help restructure its business and operations while halting court proceedings where several pot producers were sued for US$500 million over a supply dispute. Canopy Rivers, which holds a 49 per cent stake in PharmHouse, will provide the cultivator with US$7.2 million in debtor-in-possession financing. The announcement comes less than a month after a numbered company that controls the remaining 51 per cent of PharmHouse sued a group of cannabis producers including Canopy Growth, Canopy Rivers and TerrAscend Corp. for $500 million in damages.

A Biden Administration, if elected into office this November, would decriminalize the use of marijuana, according to Democratic vice presidential candidate Kamala Harris. Harris made the comments on Monday during a recent virtual roundtable hosted by ABC and Facebook Live. "Under a Biden-Harris administration, we will decriminalize the use of marijuana and automatically expunge all marijuana-use convictions, and end incarceration for drug use alone," Harris said. Teen Vogue notes that Harris's comments on cannabis decriminalization come following a recent shift after advocating against legalization a decade ago, while sponsoring legislation in 2019 that would federally deschedule cannabis and formally legalize it at the federal level.

Cannabis retailer High Tide said Wednesday its fiscal third-quarter profit came in at $4.3 million as its sales nearly tripled from the same period a year ago. High Tide, which manages 37 Canna Cabana locations in Ontario, Alberta, and Saskatchewan, said revenue jumped by 180 per cent to $23.2 million in its third quarter, as the retailer rollout out new outlets across the country. High Tide said its gross profit margin also inched higher to 40 per cent, up three percentage points from the same quarter last year. The company's shares closed down about 2.6 per cent on the Canadian Securities Exchange on Wednesday.

U.S. operator Trulieve is entering its fifth U.S. state after announcing it will acquire PurePenn and Solevo Wellness, a pair of cannabis producers and retailers in Pennsylvania in a cash-and-stock deal. Trulieve said it will pay US$46 million for PurePenn, US$27 million of which will be in the company's stock as well as an additional US$60 million if certain financial targets are hit. Trulieve also said it will pay US$20 million for Solevo, split equally in cash and the company's stock, with an additional US$15 million to be paid out if it his certain EBITDA-related milestones. Separately, the company said it will issue 4.1 million shares to the a group of underwriters to help raise $100 million to help finance the deals.

$1.5 billion New Zealand dollars
- The value of New Zealand's illicit cannabis market, according to estimates published by the Business and Economic Research firm. New Zealand plans to hold a referendum next month to determine whether it will legalize recreational cannabis in the country, which would make it the third such nation in the world to do so. 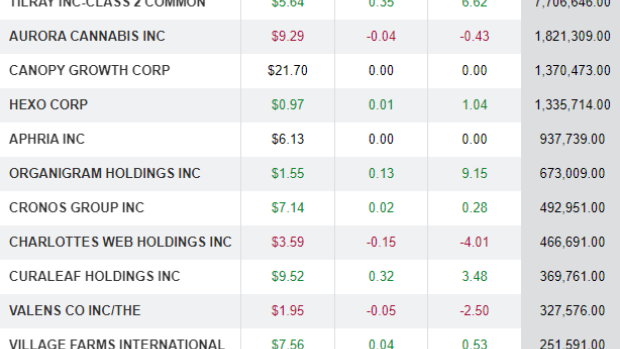