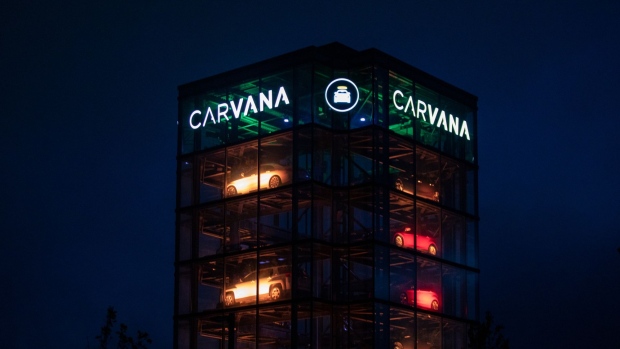 (Bloomberg) -- As Carvana Co. bondholders prepare to negotiate with the car seller to fix its debt load, they’re using a playbook that could become increasingly common when companies fall into distress.

The group of debtholders, led by Apollo Global Management Inc. and Pacific Investment Management Co., has agreed to band together in preparation for a restructuring of Carvana’s obligations, and to resist any efforts by the company to pit creditors against creditors. They own about 70% of the corporation’s unsecured debt, or around $4 billion worth.

They’re trying to short-circuit a tactic that companies have been increasingly using when they run into trouble: they get emergency financing from a hand-picked group of debtholders. Those investors get a big benefit from offering that funding, jumping to the front of the line to get repaid if the company goes broke. The other creditors end up further back, hurt by the those that collaborated with the corporation.

The growing number of these kinds of deals has spurred money managers to act, said Phil Brendel, a senior credit analyst for distressed debt at Bloomberg Intelligence.

A representative for Carvana said that the company is not involved in the agreement among bondholders, and that it’s focused on efforts to achieve profitability.

Carvana and its creditors are getting ready to do battle over restructuring the company’s debt, most of which is unsecured. Carvana has started consulting with lawyers at Kirkland & Ellis and bankers at Moelis & Co., according to people with knowledge of the matter.

White & Case LLP and PJT Partners Inc. are advising the group of bondholders that’s squaring up against the car seller, Bloomberg reported Tuesday.

The group’s resolve to stay united will likely be tested over time. The money managers are only barred from independently negotiating with the company for three months. Although that time period could be extended, some creditors may choose not to.

And even if combining forces works in this case, it may not work in other situations. Most of Carvana’s bonds are held by a relatively small number of investors, which makes it easier for them to come together. Fewer than 10 lenders initially signed the pact.

The strategy has precedent. A group of IHeartMedia Inc. creditors aligned in 2017 to block a proposed debt exchange, part of the reason the company sweetened terms of the exchange multiple times before ultimately filing for bankruptcy. During the bankruptcy of Caesars Entertainment Operating Co. last decade, a similar group of investors worked together, and litigated, and Caesars substantially boosted their takeaway.

Carvana has posted net losses every quarter since it went public in 2017 except for one. It burned through more than $2 billion of cash over the six months ended March 31 based on free cash flow, although that burn has lessened in the latest two quarters.

Carvana’s shares have fallen more than 98% this year through Wednesday’s close. Its unsecured bonds trade at less than 45 cents on the dollar, signaling that investors see a high likelihood of the company defaulting on its obligations.

Investors are looking to band together now after having failed to stand firm during the go-go years of easy money. During a decade where the Federal Reserve kept interest rates near zero, money managers were eager to snatch up debt that offered any kind of yield, and often paid less attention to the fine points of the contracts they were agreeing to. Investor protections known as covenants steadily weakened.

Weak covenants are now giving companies extra power to hurt creditors. For example struggling corporations can take valuable assets such as their brand name, put them in a new subsidiary, and borrow against them, as J. Crew Group Inc. famously did.

In other deals, lenders just provided new debt, and jumped the repayment-priority line. That’s essentially what happened with Boardriders, a surfwear retailer, and Incora, an aircraft parts maker.

In the case of Carvana, its bonds are all unsecured. But the company could borrow against assets like real estate, effectively putting existing creditors further back in line to collect money if the company were to file for bankruptcy.

When Chief Executive Officer Ernie Garcia III told investors on a conference call about Carvana’s liquidity last month, he noted that the company has $2.1 billion of unpledged real estate and other assets, including $1 billion of real estate from Adesa, a car auction company it bought in May.

(Updates with prior examples of creditors banding together in eleventh paragraph)