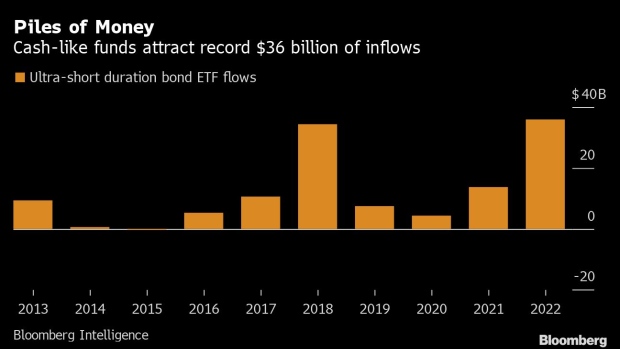 U.S. one-hundred dollar, ten-dollar, five-dollar and one-dollar banknotes are arranged for a photograph in Hong Kong, China, on Thursday, April 23, 2020. The Hong Kong Monetary Authority intervened for a third straight day this week to defend its currency peg as the local dollar touched the strong end of its trading band. Photographer: Paul Yeung/Bloomberg , Bloomberg

(Bloomberg) -- Cash is having its moment in the sun as risk assets whipsaw.

Exchange-traded funds holding bonds that mature in a year or sooner have posted inflows of nearly $36 billion this year as the Federal Reserve tightens the reins on red-hot inflation, Bloomberg Intelligence data show. That haul surpasses the previous record of $34.2 billion, set during the central bank’s last tightening cycle.

Even the shortest-term debt has enticed money managers far and wide as risk assets shudder as the Fed hikes interest rates and shrinks its balance sheet. One-month Treasury bills now yield 2.75% -- levels so juicy that Bridgewater Associates founder Ray Dalio tweeted Monday he no longer thinks “cash is trash” and that the short-term interest rate is “now about right.”

That mindset has fueled a record sum of money into cash-like ETFs, many of which are reliably paying out monthly dividends again.

“For the first time since the global financial crisis, you can actually get paid something nominally for being in short-term bonds,” said Dave Nadig, financial futurist at data provider VettaFi. “So, cash seems reasonable, for the first time in a very long time.”

Financial markets have been upended by a string of ultra-aggressive Fed hikes, with the promise of more to come. That’s crushed traditional portfolio mixes as stocks and bonds quiver in unison. Cash was the only “major” asset class that gained in the third quarter with returns of 0.5%, while the S&P 500 tumbled 4.9% and returns on long-term Treasuries fell 10%, Bank of America analysts wrote in a report Monday.

Still, not everyone is on board. Sitting in cash is “a costly decision over the long run,” Citi Private Bank strategists led by David Bailin said in a note Monday, writing that the Fed is set to reach peak interest rates next year -- setting the dollar up for a dive and making growth stocks more attractive.