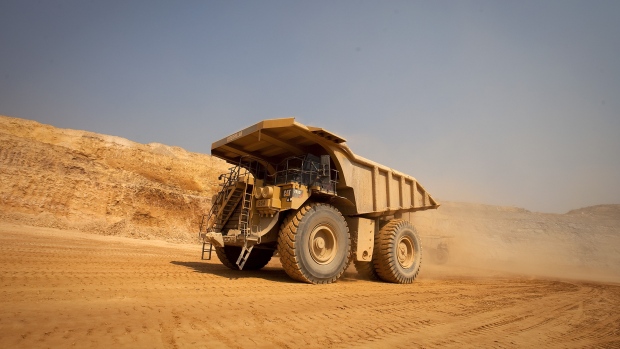 A Caterpillar Inc. mining truck leaves for the processing plant after collecting newly-excavated ore from the open pit at Katanga Mining Ltd.\'s KOV copper and cobalt mine in Kolwezi, Katanga province, Democratic Republic of Congo, on Wednesday, Aug. 1, 2012. Israeli billionaire Dan Gertler, whose grandfather co-founded Israel\'s diamond exchange in 1947, arrived in Congo in 1997 seeking rough diamonds. Since those early days, Gertler has invested in iron ore, gold, cobalt and copper as well as agriculture, oil and banking. , Photographer: Simon Dawson/Bloomberg

The US$11 billion Industrial Select Sector SPDR Fund, ticker XLI, took in over US$565 million on Wednesday, its most since November 2016. The fund is the largest industrial ETF and tracks companies such as Boeing Co., Honeywell International Inc. and Caterpillar Inc.

Shares of Caterpillar (CAT.N) climbed Wednesday after the company said China trade issues are not having a meaningful impact on sales and the pace of equipment replacement is back at normal levels in the country. The industry bellwether had posted its biggest quarterly profit shortfall in a decade in the fourth quarter, attributing part of that decline to China.

Industrials, along with technology, are the most sensitive sectors to the ebb and flow of news about the economy and the trade dispute between the U.S. and China, said Randy Frederick, vice president of trading and derivatives at Charles Schwab & Co. Inc. in Austin, Texas.

“As we continue to get positive news from Trump and his administration about progress being made with China, that starts to create optimism that big multinational industrial companies will be able to sell there and be able to sell elsewhere,” he said.

Industrials have been the best performing sector of 2019, gaining 18 per cent this year and 26 per cent since their Christmas Eve low. However, industrial sector ETFs have bled close to US$515 million this month so far, on track for another month of outflows. The sector has not seen positive monthly flows since July.