With tech’s recent pummeling, the cash Cathie Wood is managing in her ETF lineup has just dropped below US$40 billion -- but her loyal fan base is largely hanging on for the ride.

The founder of Ark Investment Management LLC now controls US$39.7 billion in her U.S. exchange-traded funds, down from more than US$60 billion at a peak in February, according to data compiled by Bloomberg. The firm is now the 11th largest issuer in the U.S., compared with seventh place earlier this year.

Cathie Wood, chief executive officer and chief investment officer of ARK Investment Management LLC, speaks during the Sooner Than You Think conference in the Brooklyn borough of New York, U.S., on Tuesday, Oct. 16, 2018. From AI-enabled robo-investing to the implications for retail of a cashless world to the impact on monetary policy if and when governments move to digital tender, technological innovation is rapidly changing our relationship to money, creating major new opportunities but also creating poorly understood risks.

A huge portion of the loss is due to the value of her holdings dropping sharply, as speculative tech names with soaring valuations and massive runs come back down to earth. Her flagship ARK Innovation ETF (ARKK) has fallen about 35 per cent from its high. Still, the mass exodus some had anticipated during a period of underperformance hasn’t yet materialized, with traders pulling just US$76 million from the fund in April and US$301 million so far in May, compared to the US$7.1 billion added in the first three months of the year. 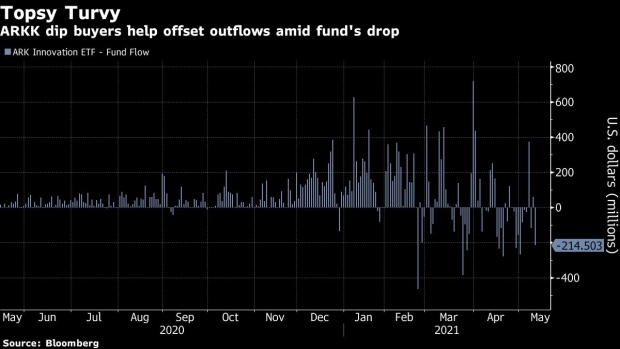 In fact, the firm’s ETFs have still taken in a net US$15.3 billion so far in 2021. The eight-product lineup -- six actively managed funds and two tracking indexes -- has roughly only lost a net US$800 million since the end of February.

While retail activity has declined in the broad market, it seems day traders are ready to stick with Ark. About US$1.1 billion of the US$28 billion added to the family of funds since November can be attributed to retail investors, according to a report from Vanda Research.

Throughout the downturn, Wood has said repeatedly that her strategies haven’t changed and that she invests with a five-year time horizon. She even added to her stakes in Twitter Inc., Roku Inc., Skillz Inc. and Peloton Interactive Inc. last week.

Some are now questioning just how long the funds’ drop will last, especially as dip buyers step in. ARKK rose in early trading before falling 3.3 per cent as of 1 p.m. in New York.

Open interest in bullish call options on ARKK is at an all-time high, and even similarly elevated activity in bearish put contracts has historically come before a bounce, Chris Murphy at Susquehanna International Group wrote in a note.

“It has become oversold on a technical basis,” said Matt Maley, chief market strategist at Miller Tabak & Co. “The weak hands have already sold, so we’re now in the ‘wait and see’ mode. If Ark funds can bounce strongly, the all clear flag will be raised.”