The drought that’s singed Canada’s crops is also taking a bite out of its cattle sector.

For the world’s sixth-largest beef exporter, dry conditions are worsening in the heart of cattle country, scorching pastures and sending feed costs soaring. The price of hay in some areas has already doubled, and some ranchers could be forced to sell animals to feedlots early in the coming weeks if the drought persists.

“We could squeak by at best, if it started raining,” said Charlie Christie, chair of Alberta Beef Producers, who is considering pulling his cows off his farm near Olds, Alberta in September, a month earlier than usual, because of the poor pasture conditions. “Worst-case scenario is it dries up, and province-wide we just don’t have enough feed. You’re going to see a liquidation of the cow herd.”

Swaths of Alberta, the nation’s biggest beef producer, got less than 60 per cent of normal rainfall since April 1, according to government data. The deteriorating grazing conditions sent the price of hay used as feed to as high as $200 a metric ton, twice as much as a year earlier, according to Alberta Beef Producers. Feed barley has jumped 30 per cent in that time, according to Brian Perillat, a senior analyst at Calgary-based Canfax. 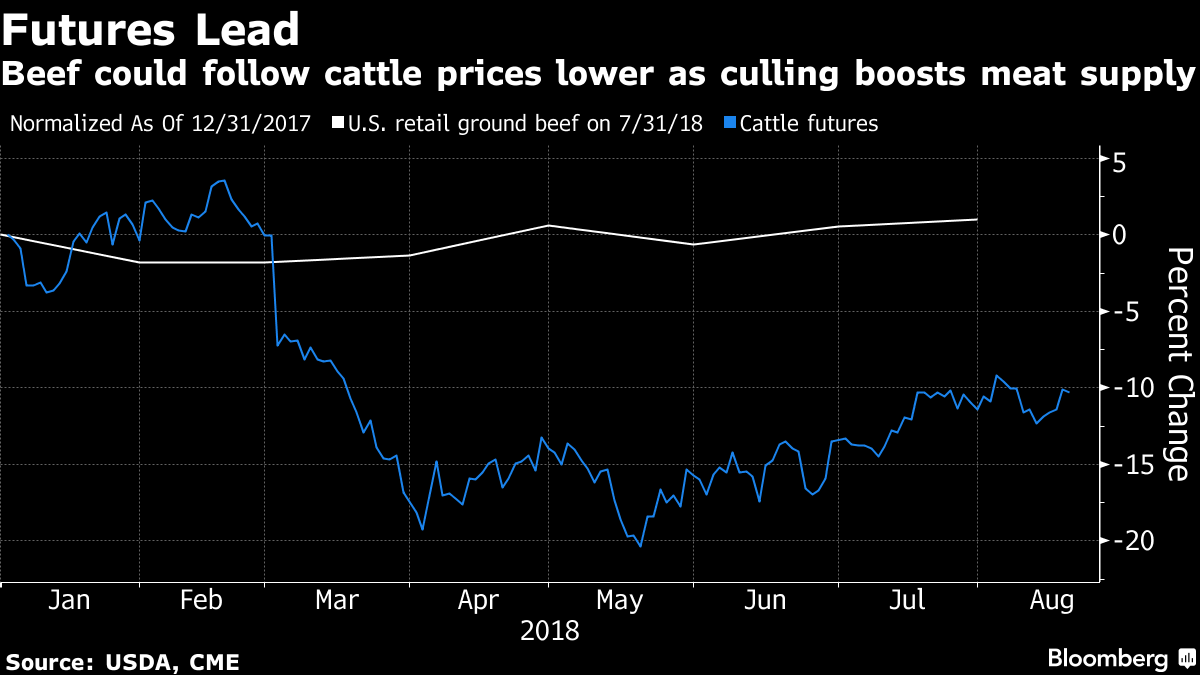 In southern Alberta, 60 per cent of pastures are in poor or fair condition, according to an Aug. 17 report from the province’s agriculture ministry. The lack of available hay and pasture means some buyers are turning to poorer quality and hail-damaged crops. Meanwhile, cattle producers’ feed inventory is limited, and “hay and pasture for sale is scarce,” the ministry said in an earlier report. Drought has also limited feed supplies in neighboring provinces, where crops are wilting and there’s little pasture regrowth due to moisture stress, Manitoba’s agriculture ministry said Monday in a report.

“There are guys looking for feed all over the place,” said Rick Toney, chairman of the Saskatchewan Cattlemen’s Association. “Guys are planning on selling because they can’t afford to feed their cows this winter.”

Dryness has also struck the southern U.S. Plains, also forcing some ranchers this year to sell cattle to feedlots earlier than normal. The move helped boost meat supplies, and cattle futures traded in Chicago have slumped about 9 per cent in 2018. American beef production is projected to swell 3.5 per cent this year to a near record 27.2 billion pounds, with the growth rate slowing to 2.3 per cent in 2019, the U.S. Department of Agriculture estimates.

In Canada, the extra culling is expected at a time when the herd was already growing at a limited rate. Ranchers held 9.7 million beef cattle as of Jan. 1, up less than 1 per cent from a year earlier, according to the latest available government data.

At Toney’s farm in Gull Lake, Saskatchewan, he and his son plan to cull their herd by 10 per cent more than usual to keep feed costs in check.

“We’ll just get a little tougher on them and get rid of a few more,” Toney said by phone. “Putting the extra money into the feed you’re not going to get the return on that money.”