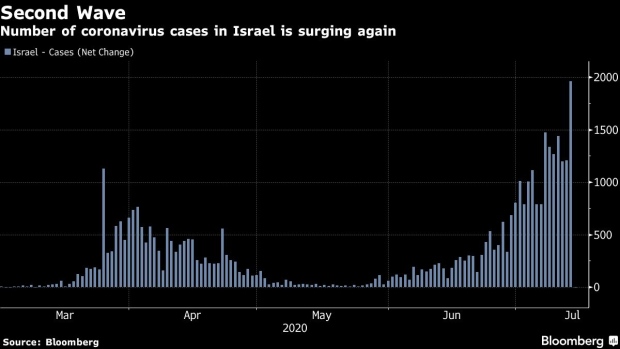 Israel’s government should take advantage of historically cheap debt to tackle longstanding economic problems, and not only the immediate crisis wrought by the coronavirus pandemic, according to the central bank’s No. 2 official.

Now is the time to boost productivity by investing in areas such as infrastructure and education, Bank of Israel Deputy Governor Andrew Abir said.

“The emphasis has been quite rightly on the short term,” Abir said in a interview Tuesday. “That doesn’t mean when we start thinking forward that we shouldn’t take advantage of the present situation and think about how can we improve the overall state of the Israeli economy not just over the next year, but the next five to 10 years.”

The government has stepped up debt issuance as it finances around 190 billion shekels ($55.2 billion) in emergency crisis relief. It “should be issuing as long as it can, increasing the duration -- and it is doing this,” Abir added.

Fiscal discipline urged by the central bank has been instrumental to driving down the cost of debt, even in the midst of the Covid-19 crisis. Stanley Fischer, former vice chairman of the Federal Reserve and a onetime Bank of Israel chief, has also told the government the low rates present a unique opportunity, according to Prime Minister Benjamin Netanyahu.

When a first wave of coronavirus cases hit Israel in March, the Bank of Israel committed to a 50 billion shekel ($14.5 billion) government bond-purchasing program. As cases surge again, the central bank last week took the unprecedented step of introducing a corporate bond-buying program.

Early signs for the new program “have been very promising,” with companies rolling out new issuances since the announcement, Abir said.

Commenting on other aspects of monetary policy, Abir said: