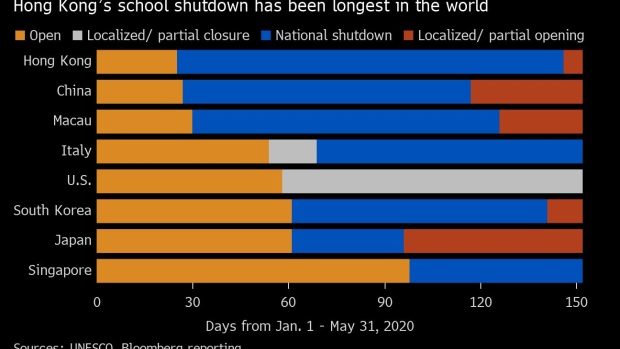 (Bloomberg) -- Germany’s Angela Merkel and France’s Emmanuel Macron want the European Commission to issue EU debt to finance a relief fund for the Continent and Group of Seven central banks continue snapping up assets to bring about financial stability as the pandemic sends the global economy reeling into a recession.

Data this week continued to show the severe economic disruption from coronavirus mitigation efforts worldwide. In the U.K., applications for jobless benefits soared to a record, while U.S. home construction took a sizable hit.

Home construction starts plunged in April by the most in records back to 1959, as the nationwide lockdown to control the spread of the coronavirus hammered the housing market and broader economy. Nonetheless, the data may market a bottom for the industry as a separate report showed improved builder sentiment on the heels of lower rates.

A raging pandemic, lockdowns and continued trade tensions didn’t curb China’s enthusiasm for some U.S.-built luxury cars: Alabama’s auto exports to China in the first quarter of 2020 soared more than 170% from a year ago.

Germany and France want the European Commission to issue 500 billion euros ($550 billion) of European Union debt to finance a Recovery Fund that will be distributed according to need. Using the commission’s growth forecast downgrades to identify which economies need the most help, and assuming the new debt is apportioned by economic heft, Bloomberg Economics identified the winners and losers.

The number of Britons seeking jobless benefits surged by the most on record in April as the coronavirus lockdown that started in March sent shock waves through the U.K. economy.

Four months after closing their doors due to the pandemic, Hong Kong’s schools are reopening, bringing an end to the world’s longest school shutdown. While the resumption of classes is a positive development, the city’s educators must now grapple with how to narrow the learning gaps that have expanded during the outbreak.

Its economy reeling from the collapse in oil prices and the coronavirus, Russia is suspending one of the key foundations of the tight-money policies that have made it an investor favorite.

Bananas have a claim to be the modern world’s first globalized product and are still the most exported fruit on the planet. Yet the trade that began some 130 years ago is now a potent symbol of the underlying fragility of globalization. How it adapts and responds may suggest a path toward rebuilding international consensus in the post-pandemic era.

The coronavirus outbreak has pushed major central banks to take extreme steps to support growth and underpin financial stability. Across the Group of Seven, that’s included the return or launch of large-scale asset purchases.