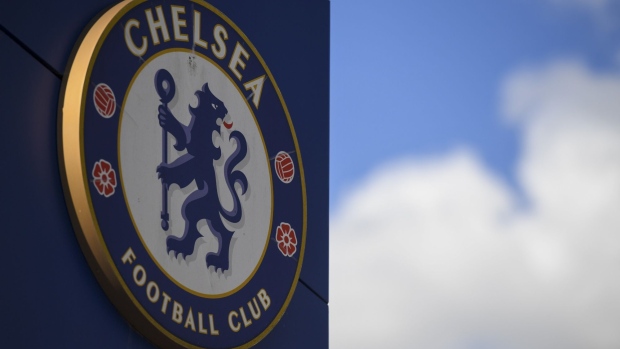 A Chelsea Football Club emblem at Stamford Bridge Stadium in London, U.K., on Friday, March 18, 2022. One side effect of Russia’s invasion of Ukraine is uncertainty about the future of London’s Chelsea Football Club, one of the most glamorous franchises in the world’s most popular sport. Photographer: Chris J. Ratcliffe/Bloomberg , Bloomberg

(Bloomberg) -- Todd Boehly’s £4.25 billion ($5.2 billion) takeover of Chelsea FC has hit a snag amid disagreements between the UK government and the club’s owner Roman Abramovich over the terms of the deal, according to a person familiar with the matter.

The transaction, agreed this month, needs sign off from ministers to ensure funds don’t make their way to Abramovich, the billionaire sanctioned earlier in the year over his alleged ties to Russian President Vladimir Putin.

But disagreements have emerged over the treatment of roughly £1.6 billion in debt owed to Abramovich, the person said, asking not to be identified discussing confidential information.

While the oligarch has agreed to waive the debt and have the money paid to a charitable foundation instead, details of exactly how this will happen are slowing the process, the person said.

Details of the disagreement were reported earlier Monday by the Times of London, which cited unnamed people.

Boehly is pushing to complete a deal by May 31, when a special operating license granted to Chelsea by the government expires. If that doesn’t happen and a license isn’t renewed, Chelsea runs the risk of being unable to play matches next season.

Boehly remains committed to the deal, a person familiar with the matter said. A representative for the UK government declined to comment, while spokespeople for Abramovich, Boehly and Chelsea didn’t immediately reply to requests for comment.

The sale of Chelsea, one of the biggest names in world sports, attracted bidders from around the globe.

Proceeds are to be deposited into a frozen U.K. bank account with the intention to donate 100% of them to charitable causes. Government approval will be required for the proceeds to be transferred from that account, Chelsea has said.