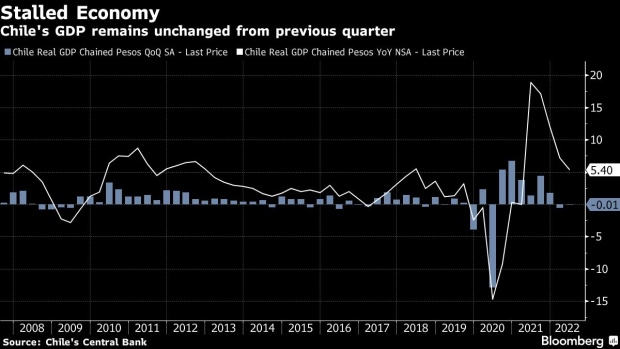 A shopper looks at perfumes being sold by a street vendor in Santiago, Chile, on Thursday, Sept. 2, 2021. Chile's central bank raised its 2021 growth and inflation forecasts as the economy runs hot, a day after policy makers delivered the biggest interest rate increase in two decades. Photographer: Tamara Merino/Bloomberg , Bloomberg

(Bloomberg) -- Chile’s economy is teetering on the brink of recession after unexpectedly flatlining in the second quarter amid soaring inflation and heightened political uncertainty over a new constitution.

Gross domestic product was unchanged in the April-June period from the previous three months, worse than all forecasts in a Bloomberg survey of analysts that had a 0.3% median estimate. It shrank in the first quarter. From a year prior, the economy expanded 5.4%, the central bank reported on Thursday.

Chile’s economy is running out of steam after last year’s boom as President Gabriel Boric’s administration weans the population off of stimulus and inflation hits the highest in almost three decades. Consumers are also getting pinched as the central bank extends aggressive interest rate hikes, while businesses are holding back on investments ahead of next month’s referendum on a new constitution.

“Chile GDP data for the second quarter showed a second straight drop in domestic demand -- confirming the economy has reversed trend after the sharp rebound from the pandemic.”

Domestic demand fell 0.9% during the second quarter compared to the first three months of the year as retail dropped by 1.2% and manufacturing declined 0.3%. On the other hand, mining increased 3.1%, according to the central bank. The nation’s current account deficit widened to $6.6 billion.

“All in all, the economic performance during the first half of the year was poor,” Andres Abadia, chief Latin America economist at Pantheon Macroeconomics, wrote in a report. “Looking ahead, conditions remain challenging. We expect GDP to fall by about 0.2% in both Q3 and Q4.”

Annual inflation has rocketed to a 28-year high on rising raw material costs and a recent currency plunge, prompting the central bank to extend a hiking cycle that’s added 925 basis points to borrowing costs in just over a year.

Boric has responded with limited aid including a new round of payouts to help the poorest face the surging cost of living without hurting public finances. It’s a turnaround from last year, when billions of dollars from early pension withdrawals and cash transfers were plowed into the economy.

On Sept. 4, voters will head to the polls for a referendum on a new charter that was written in response to social unrest in 2019-2020. Polls show the proposal will likely be rejected, though Boric has said he will back a new constitutional rewrite, a move that could prolong political uncertainty.