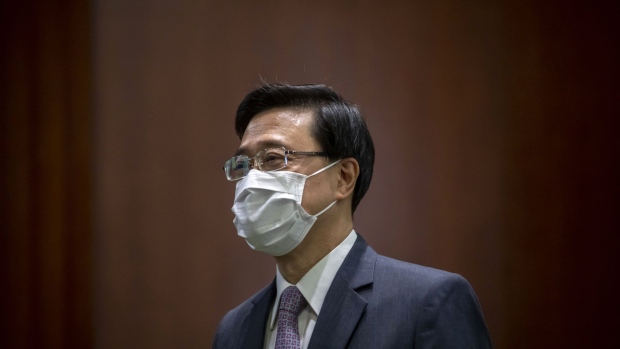 (Bloomberg) -- Hong Kong’s No. 2 official, John Lee, will be the only candidate to seek the city’s top post, local media reported, as China looked to elevate one of the chief proponents of a sweeping crackdown on the local opposition.

China’s Liaison Office told local elites in a series of meetings Wednesday that Lee, 64, had the central government’s blessing to become chief executive, media including the South China Morning Post newspaper reported, citing people familiar with the matter. He was expected to resign Wednesday, a necessary step for any official seeking higher office.

Lee’s solitary run in the May 8 vote, when 1,500 mostly Beijing loyalists pick the next leader of the Asian financial hub, would mark the first time in two decades that a candidate has run unopposed.

The former career police officer emerged as a potential candidate in June when he was named chief secretary, a post that’s launched two of the city’s four leaders into the top job. Prior to that, Lee served as outgoing Chief Executive Carrie Lam’s security minister, overseeing a clampdown on the pro-democracy opposition and implementing a Beijing-drafted national security law.

Lam announced Monday that she wouldn’t seek re-election after a tumultuous five-year term consumed by internal crises, unprecedented intervention by Beijing and increasing isolation from the West. Friction points included mass protests in 2019, the subsequent security law and Covid-19 policies that all but closed the city’s borders.

Hong Kong’s next leader will take office July 1, the halfway mark in Beijing’s 50-year pledge to preserve the city’s liberal financial and political systems. No chief executive has so far managed to complete two full terms, as they struggle to balance Beijing’s demand for control and citizens’ expectations for greater freedoms.

Lee’s security background will bolster concerns that Beijing will further tighten its grip. The former police officer was a staunch supporter of the extradition to China bill that sparked the 2019 protests, and was sanctioned by the U.S. in 2020 for his role in curtailing political freedoms under the security law.

The former police official has been a leading critic of the city’s once-freewheeling press. He accused the now-shuttered Apple Daily newspaper of using journalism to endanger national security, and has called journalists who use media work to pursue a political purpose “evil elements.” Lee has frequently written letters to dispute the coverage of foreign media outlets during his tenure, including Bloomberg News, the Economist and the Wall Street Journal.

In January 2019, Lee told the city’s legislature that counterterrorism measures in China’s western region of Xinjiang were “humane.” The U.S. has said that the Chinese government’s treatment of the ethnic Uyghur minority amount to genocide. Lee has since warned of the need to tackle terrorist threats in Hong Kong.