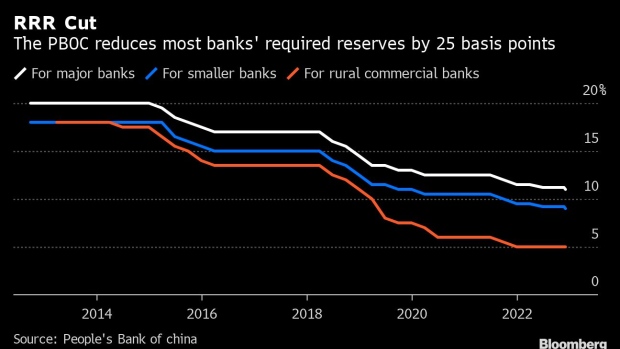 “Our focus is growth right now,” Yi said in a video speech given to a central bank conference in Bangkok on Friday. “We have a pretty accommodative monetary policy in place to help with economic recovery and maximize employment.”

The growth rate is currently “somewhat slower than expected due to Covid and other factors,” Yi said. He pointed out that inflation has been relatively subdued, saying it will likely remain in a “moderate range” in 2023.

The PBOC recently surprised market watchers by cutting the reserve requirement ratio for banks -- unleashing more cash that banks can use for lending. Economists expect the central bank to keep monetary policy relatively loose into at least early next year.

Speculation is also growing the Communist Party’s Politburo, its top decision-making body, will likely signal a more pragmatic approach toward Covid controls during its December meeting, while placing greater focus on boosting growth.

Yi’s comments “confirmed the recent shift of policy focus to growth after the party Congress” in October, said Ken Cheung, chief Asian FX strategist at Mizuho Bank Ltd. “In addition to the Covid policy, the reform in the property market has yielded progress and the PBOC is set to maintain its easing bias to support the property sector and boost growth after the Covid hit.”

Chinese stocks traded 0.4% lower as of 1:54 p.m. local time after gaining in the previous three sessions.

The recent relaxation of some virus curbs as well as a shift in the official rhetoric around Covid Zero has fueled hopes the country may be preparing to reopen next year. The economic recovery will remain bumpy though, with growth likely to come in below 5% next year, according to economists surveyed by Bloomberg. The economy is forecast to expand just 3.3% this year, which would be the second-slowest pace since the 1970s after 2020.

Yi said aside from quantitative monetary policy tools, the PBOC is also making use of structural instruments to boost its support to small businesses, the agriculture sector and private firms.

The governor’s comments were part of a panel with other central bankers hosted by the Bank of Thailand and the Bank for International Settlements. European Central Bank President Christine Lagarde, Reserve Bank of Australia Governor Philip Lowe and Bank Indonesia Governor Perry Warjiyo appeared in person at the event.

Yi called for stronger collaboration between advanced and emerging economies on macroeconomic policies, as indicators point to a rising possibility of a global recession next year. Many emerging markets and low-income countries are now facing pressures from a depreciating currency, capital outflows and inflation, he said.