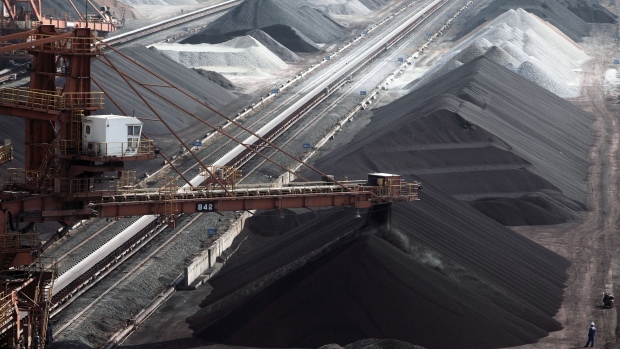 A conveyer belt dumps iron ore into a pile at an iron ore transfer and storage center operated by the Shanghai International Port Group in Shanghai, China, on Tuesday, Jan. 26, 2010. Iron ore for immediate delivery into China surged to $131.20 a metric ton on Jan. 8, the highest in at least 13 months, according to data compiled by The Steel Index, a venture of Steel Business Briefing Ltd. Photographer: Qilai Shen/Bloomberg , Bloomberg

(Bloomberg) -- China followed up its massive import pull in June with a record iron ore haul last month, although port congestion caused its purchases of crude to slow.

The booming appetite for the steelmaking material may help alleviate concerns that the bounty in materials is masking weaker underlying demand. It also won’t hurt that exports jumped as global demand for Chinese factory goods appears to be rekindling.

Soybean imports also remained near record levels as crushers increased purchases from Brazil to profit from cheap supplies amid a recovery in the domestic hog herd,

Energy was the one area of disappointment, as crude oil slipped from its July record as port congestion in refining regions has kept supertankers waiting for weeks to unload. Coal dipped for a third month relative to the previous year as the government maintains import restrictions to boost domestic miners, much to the chagrin of Glencore Plc’s Ivan Glasenberg.

China is leading the way in electric vehicle infrastructure, with more than half of the world’s 1 million charging points, according to a recent tally by BloombergNEF. Analysts there expect one in 10 vehicles purchased in 2025 will be battery-powered and by 2040, the world will need some 12 million public charging points and almost $400 billion spent on infrastructure.