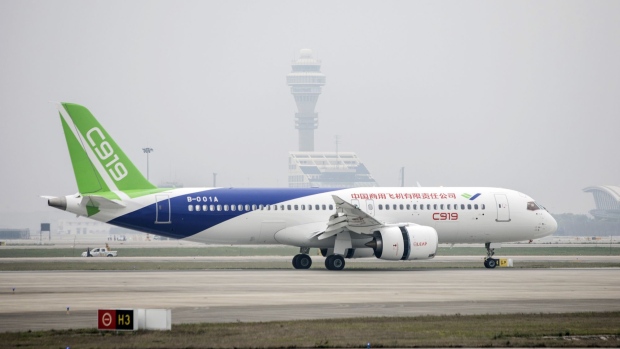 (Bloomberg) -- China Eastern Airlines Corp. became the first recipient of the Chinese-made C919 passenger jet Friday, a milestone in the country’s aviation ambitions as it bids to compete with aircraft made by Airbus SE and Boeing Co.

The single-aisle plane was delivered to China Eastern at Pudong International Airport in Shanghai and then made a short flight to the city’s Hongqiao Airport, landing at midday.

The C919, built by Commercial Aircraft Corp of China Ltd., is one of five ordered by China Eastern to be delivered through 2023. It is due to start flying commercially next spring. Comac, as the manufacturer is known, added 300 new orders in November from undisclosed buyers, on top of 815 already booked for the narrowbody, mostly from Chinese lessors.

Comac has struggled to drum up interest for the C919 overseas, not helped by 14 years of planning, testing and missed deadlines. The plane was awarded a production certificate in November, but Comac hasn’t provided details on how many it will roll out a month, an industry benchmark to gauge demand.

The C919 delivered to China Eastern has 164 seats in two cabins, including eight in business class and the rest in economy class, and 20 drop-down screens to play videos. The middle seat in each row is 1.5 centimeters (0.6 inches) wider than the neighboring ones. According to Comac’s website, the C919 is designed to carry 158 to 192 passengers.

While the C919 delivery is significant, the plane faces an uphill battle to challenge the European and American manufacturing duopoly. Airbus received one of its biggest orders ever from China over summer and Boeing planes are widely used in the country, even though its 737 Max has yet to return to commercial service.

Comac’s suppliers include General Electric Co., Honeywell International Inc. and CFM International Inc., a joint venture between GE and Safran SA. China Eastern had a fleet of 750 jets at the end of June, including 357 A320s and 288 Boeing 737s.

(Updates with confirmation of delivery in second paragraph.)