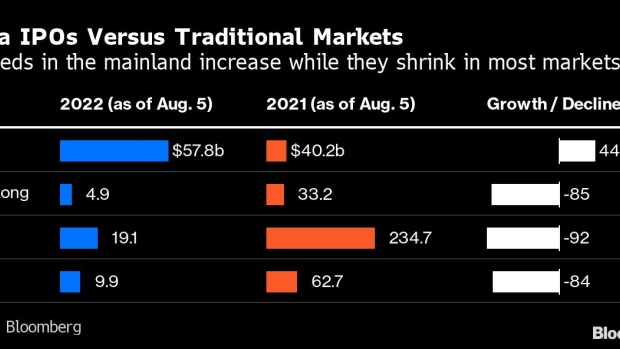 (Bloomberg) -- From London to Hong Kong, large initial share sales have all but dried up across the world’s major financial centers this year. But the market in China is bustling with activity.

Initial public offerings on mainland exchanges have climbed to $57.8 billion so far in 2022, the largest ever for such a period, according to data compiled by Bloomberg. There have been five IPOs of above $1 billion since January, and one more is on the way. That’s versus just one such sale each in New York and Hong Kong, and none in London.

China’s IPO market has defied headwinds such as rising interest rates and fears of a US recession, which have brought major equity fundraising elsewhere to a virtual standstill. Offerings in the Asian economy -- whose monetary policy is diverging from the Federal Reserve -- are largely geared toward local investors.

The surge in listings, according to some market watchers, is also driven by concern that economic conditions could worsen later in the year as flareups in virus cases cause Beijing to stick to the strict Covid Zero strategy. Top leaders have signaled a softening on this year’s official growth target of around 5.5%, denting optimism about a rebound.

“Companies have a stronger willingness for IPO because they see the first half as a better time window to get listed than the time ahead,” said Shen Meng, a director at investment bank Chanson & Co. “They have a weaker outlook for the market and worry that factors including earnings uncertainty could make listing in the future harder than now.”

With companies rushing to list, China’s share in global IPO proceeds has more than tripled to 44% this year from 13% at end-2021, according to data compiled by Bloomberg.

Better performance of newly traded stocks has also been a draw for listing hopefuls. Shares of mainland IPOs are up by an average 43% this year over their listing price, versus the 13% drop seen in Hong Kong.

Meanwhile, China’s benchmark CSI 300 Index has fallen about 16% since Dec. 31 -- one of the worst performers among major global equity gauges -- as investors have had to grapple with stringent Covid curbs, a deepening real-estate crisis and a continued crackdown on internet giants.

To be sure, new share sales owe part of their strong performance to the fact that valuation during the IPO is capped by local rules. That typically ends up leaving some gains on the table for the newcomers -- flops happen, but they’re rare.

Some of the deals that boosted the tally in China have political undertones. Telecom provider China Mobile Ltd. and energy producer CNOOC Ltd., the biggest debuts of 2022, both listed at home after being kicked out of the US following their inclusion on a Donald Trump-era blacklist. In China, they raised $8.6 billion and $5 billion, respectively, and are trading well above their listing prices.

“China is a separate market from the rest of the world. Something that is unique among Chinese investors are those patriotic trades,” said Ke Yan, the head of research at DZT Research in Singapore. “Buying stocks that help China to be more independent from rest of the world and to resist transactions from the US is normal.”

Overall though, the tech sector has been one of the busiest for new share sales in China.

A semiconductors maker, a manufacturer of digital storage products and a chips producer surged after debuting in the mainland on Friday. Together, their IPOs raised $1.1 billion.

A lot of the stocks now coming to market in China “are from the tech sector, that investors seem eager to buy given the focus on building up home-grown capabilities,” said Brian Freitas, an analyst for independent research platform Smartkarma in Auckland.