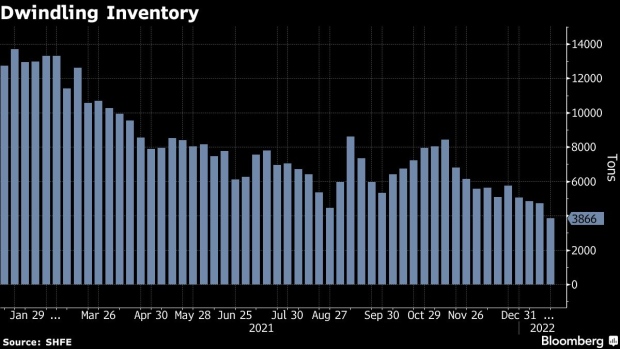 (Bloomberg) -- Most of the Australian coal used by steelmakers that was being held at Chinese ports in the wake of Beijing’s import ban has now been cleared, according to local research firm Fengkuang Coal Logistics, although there’s no sign that the halt on new shipments will be lifted.

Customs data for the final quarter of last year show 6.2 million tons of Australian coking coal were finally allowed in, along with another 5.5 million tons of thermal coal from China’s erstwhile trading partner that was destined for power plants.

It’s unclear how much coal in total was stranded after Beijing halted Australian imports near the end of 2020 as political ties with Canberra soured. Still, the customs figures are close to industry estimates of the amount of coal that was in limbo, and it’s highly likely in any case that China’s power crisis in the autumn would have soaked up most of the thermal coal also being held at its ports.

But that’s not quite the end to a saga that at its most dramatic saw dozens of carriers stacked for months off the Chinese coast, trapped between the authorities who wouldn’t let them unload and buyers who wouldn’t let them leave. The upshot is that the ban on Australian coal has created some unlikely winners.

China doesn’t produce enough of the higher-grade coking coal and was for a long time reliant on Australian mines. But pandemic controls have choked the flow of shipments from neighboring Mongolia, another top supplier, leaving exporters in the U.S. and Canada -- hardly nations favored by Beijing -- to pick up the slack.

Even as China’s total coking coal purchases dropped by about a quarter to 55 million tons last year, the amount arriving from the U.S. grew nearly 10 times to account for almost 20% of China’s imports, according to Fengkuang. Meanwhile, Canadian shipments doubled to nearly the same portion.

Whether the ban on Australian fuel continues, and the impact of the pandemic on Mongolian supplies, mean that “the coking coal import market in 2022 remains highly uncertain,” Fengkuang said.

China’s needs this year will depend on demand from the steel industry, which in turn will be shaped by whether Beijing continues to insist on lower production to meet its carbon targets, and the degree to which infrastructure spending will be used to buttress flagging economic growth.

Nickel stocks monitored by the Shanghai exchange have never been this low, helping to propel futures to record levels amid fears that one of the most volatile metals is in the grip of a historic squeeze. But some relief may be due as the approaching Lunar New Year holiday curtails industrial demand.

China only sold a fraction of the LNG it was offering for 2022, easing concerns that the huge sales would flood the market despite a global shortage.

Chinese authorities are ramping up support for the economy -- deploying an array of tools to counter downward pressures on growth, according to Bloomberg Economics’ policy dashboard.

Looser monetary policy in China won’t be sufficient to stabilize the economy and a faster increase in government spending is needed, according to a former adviser to the central bank.