China National Offshore Oil Corp., the nation’s main deepwater explorer, is among four companies to be added to a list of firms owned or controlled by the Chinese military, Reuters reported. The move comes as the Trump administration plans several new hard-line moves against Beijing in the final weeks of its term.

CNOOC hasn’t yet received any official notice or decision from any relevant U.S. government agency, the firm’s listed unit said in an exchange filing in Hong Kong. “The company is closely monitoring the development of the situation,” it said.

CNOOC is the smallest of China’s so-called big three state-owned oil majors after China National Petroleum Corp. and China Petrochemical Corp., also known as Sinopec. CNOOC’s operations in the South China Sea have run into controversy because China claims drilling rights in waters far from its borders, and within 200 miles of countries like Vietnam and the Philippines. 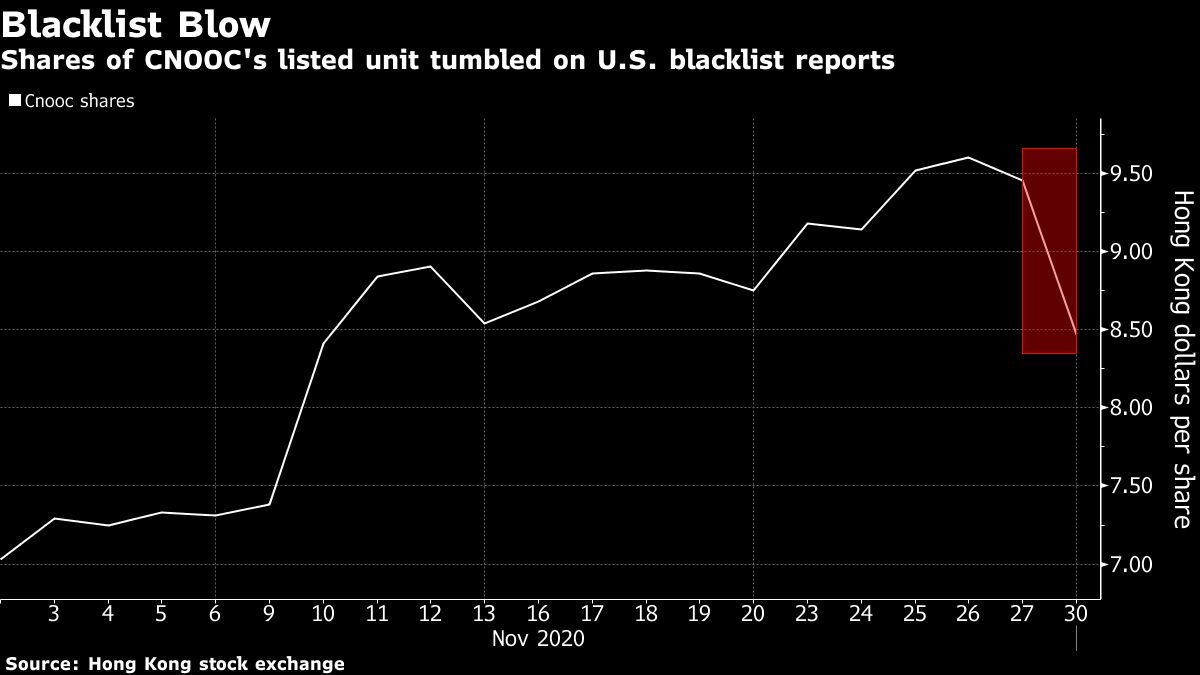 “My guess is it’s CNOOC that got targeted, and not CNPC or Sinopec, because of its drilling in the South China Sea area, which is deemed as so-called military actions by the U.S.,” said Lin Boqiang, dean of the China Energy Policy Research Institute at Xiamen University in southern China.

U.S. investors held 16.5 per cent of the shares in CNOOC’s Hong Kong-listed unit as of Friday, creating potential for major outflows if they’re forced to divest, according to Henik Fung, an analyst with Bloomberg Intelligence. President Donald Trump signed an order this month barring American investments in Chinese firms owned or controlled by the military. The unit, Cnooc Ltd., fell 14 per cent on Monday.

CNOOC also owns U.S. oil and gas fields, partners with companies like Exxon Mobil Corp. on international projects, and uses American technology and equipment. Any disruption along those lines would have a “huge impact” on the company, said Sengyick Tee, an analyst at SIA Energy in Beijing.

The company may have taken pre-emptive steps to protect itself in October, when it amended its its non-compete clause to allow the listed unit to transfer assets to its parent, Daiwa Capital Markets analysts including Leo Ho said in a note. The move could allow it to avoid political risk if the blacklist escalates into sanctions, the analysts said.

CNOOC has been at the center of territorial disputes in the South China Sea since 2012, when it invited foreign drillers to explore blocks off Vietnam that Hanoi’s leaders had already awarded to companies including Exxon Mobil and OAO Gazprom. In 2014, the countries traded accusations that each other’s boats had rammed vessels, including around a CNOOC oil rig near the Paracel Islands.

The Philippines in October resumed oil exploration in the South China Sea for the first time since 2015, when the nation filed a case with the Permanent Court of Arbitration over the disputed waters. The resumption came after Manila and Beijing reached a framework agreement for joint exploration. Philippine firm PXP Energy Corp. has said it’s in talks with CNOOC for such a partnership.