China’s housing slump and electricity shortages dragged down economic growth last quarter, with signs there will be more pain to come as the country heads into winter and property curbs remain.

Gross domestic product expanded 4.9 per cent from a year earlier, the National Bureau of Statistics said Monday, down from 7.9 per cent in the previous quarter, and largely in line with economists’ projections.

Beijing has signaled it’s not rushing to stimulate the economy, suggesting growth may continue to slow in the coming months. That means the country’s usual voracious demand for construction-related commodities could weaken further. 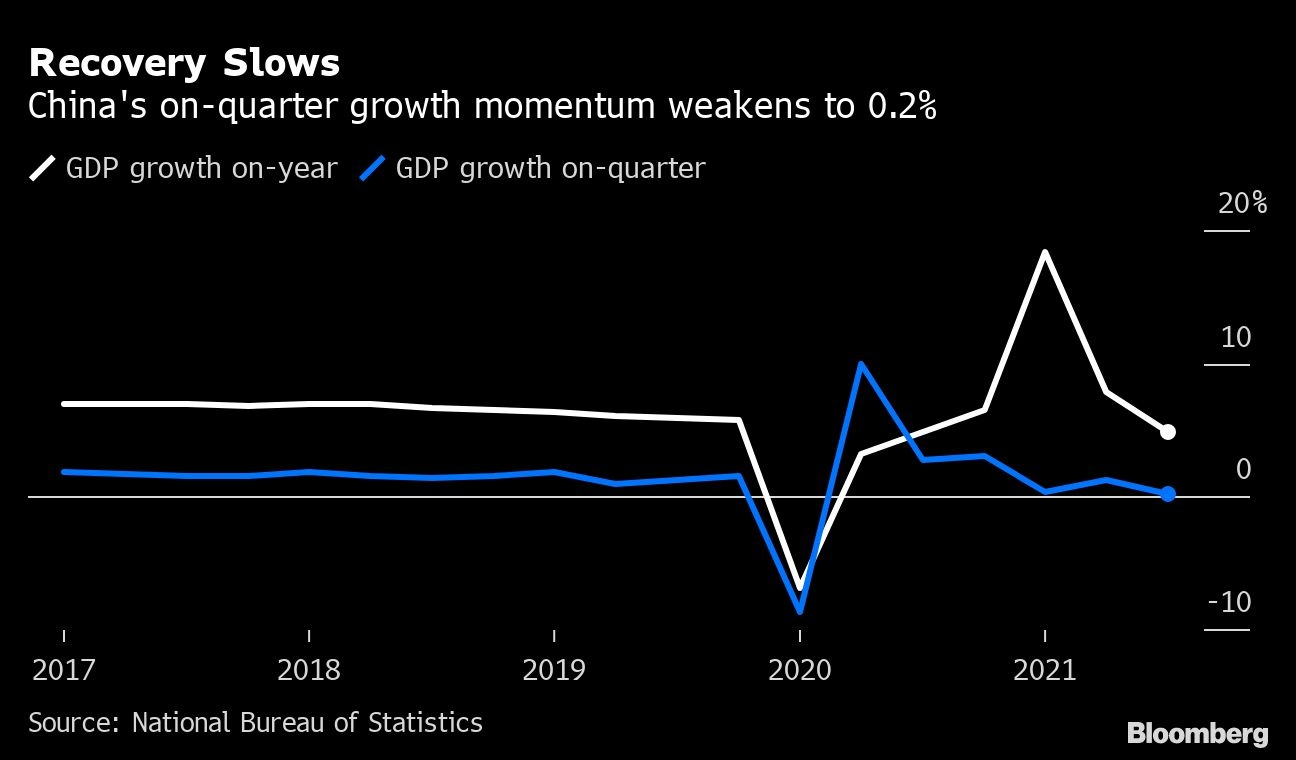 The slowdown was largely a result of an attempt by Beijing to reduce financial risks by slowing the pace of lending to the real estate sector, which accounts for up to 25 per cent of GDP once related industries are added. A worsening debt crisis at China Evergrande Group has added to the industry’s woes, with land sales plunging and the risk of contagion rising.

At the same time, authorities are cracking down on local government debt, which fuels infrastructure investment, and an energy crunch that hit the economy last month forced factories to curb or halt production.

“The outlook remains vulnerable with power shortages, property curbs,” said Raymond Yeung, chief economist for Greater China at Australia & New Zealand Banking Group Ltd., who cut his full-year growth forecast to 8 per cent from 8.3 per cent. President Xi Jinping “is very serious in reform even at the expense of the GDP figures.”

Growth was expected to slow in the third quarter given the higher base of comparison from a year ago. However, the severity of the energy crisis and property slowdown has surprised economists, prompting many to downgrade their full-year GDP forecasts. People’s Bank of China Governor Yi Gang said Sunday the recovery remains intact even though growth momentum has “moderated somewhat.” He forecast the economy would expand about 8 per cent this year, exceeding Beijing’s official target of above 6 per cent.

Monday’s data showed that production of construction-related commodities, such as steel and cement, fell in September from the previous month. A broad measure of investment in fixed assets such as real estate and infrastructure fell 2.5 per cent in September from a year earlier, with the largest drag coming from the real estate sector, according to an analysis by JPMorgan Chase & Co.

In addition to the property slowdown, a nationwide shortage of coal led China’s electricity output to fall in September from the previous month, forcing factories in more than 20 provinces to curb output or shut completely.

“The investment side of demand is pretty weak, and the power crunch impact on the supply side is also pretty severe,” Helen Qiao, chief Greater China economist at Bank of America Corp, said in an interview on Bloomberg TV. Fourth-quarter growth is likely to slow to 3 per cent to 4 per cent, she said.

China has been racing to increase output from its coal mines, but limits on electricity supply to industry could last through the winter months, especially if coal is diverted for use in heating homes. Thermal coal futures extended a rally in Monday trading as some provinces said they’ll bring forward the start of the heating season due to cold weather.

On the upside, export growth surged in September, while retail sales growth improved from the previous month as officials loosened restrictions introduced in August to contain sporadic outbreaks of the coronavirus. The unemployment rate fell slightly.

As a result “the government may not feel the urgency to launch stimulus and boost growth,” said Zhang Zhiwei, chief economist at Pinpoint Asset Management Ltd. 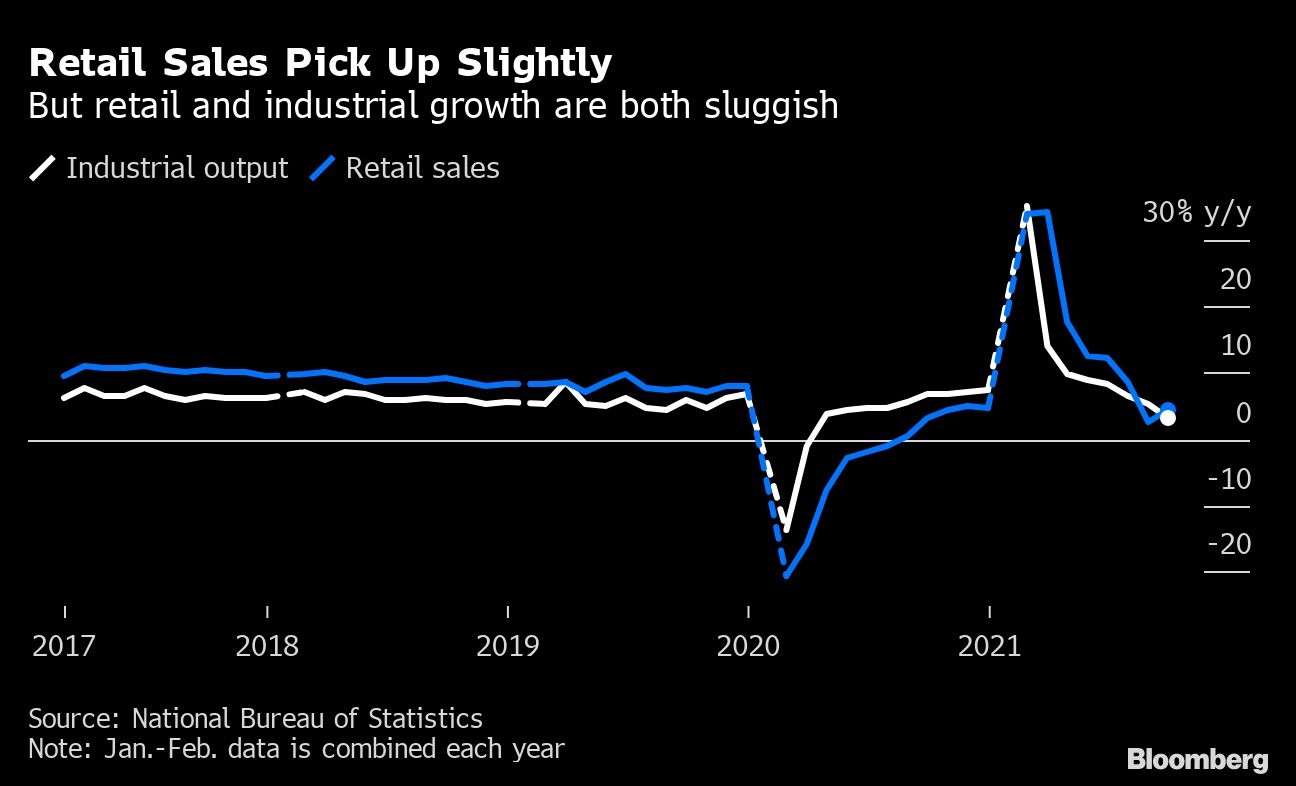 Consumer spending growth is yet to rebound to its pre-pandemic rate, making China more dependent on external demand. The trade surplus increased to 4 per cent of GDP in the third quarter, according to calculations from Natixis SA, up from about 1 per cent before the pandemic.

The GDP figure was broadly in line with market expectations, and China’s benchmark CSI 300 pared its loss to 1.6 per cent as of 1:30 p.m. in Shanghai from as much as 1.8 per cent earlier. Bond futures erased losses, with the 10-year contracts falling 0.42 per cent.

Downward pressures on China’s economy were stark in the third-quarter GDP and September activity data, and are likely to persist into 4Q. The slowest GDP growth reading in a year reflected much more than a challenging base. A confluence of shocks -- from delta variant outbreaks, to power shortages and regulatory tightening -- hammered the economy.

The NBS said in a statement the economic recovery “is still not solid” and remains unbalanced, though China will ensure it can achieve its annual targets.

Beijing’s modest growth goal for the year suggests authorities may not be in any rush to pump in significant stimulus to arrest the slowdown. Premier Li Keqiang sounded a confident note on the economy in a speech last week, saying China “growth leveled off a little bit, but for the whole year we have the confidence and the ability to meet our overall development targets”.

Economists expect targeted fiscal support through more local government bond sales, and slight monetary easing, with a chance of another cut in the reserve requirement ratio for banks. The PBOC refrained from injecting liquidity into the financial system on Friday, while at the same time asking lenders to keep credit to the real estate sector “stable and orderly.”

“Supporting GDP growth is becoming a policy focus,” he said. GDP growth at 4.9 per cent “would change the debate in the Politburo.”