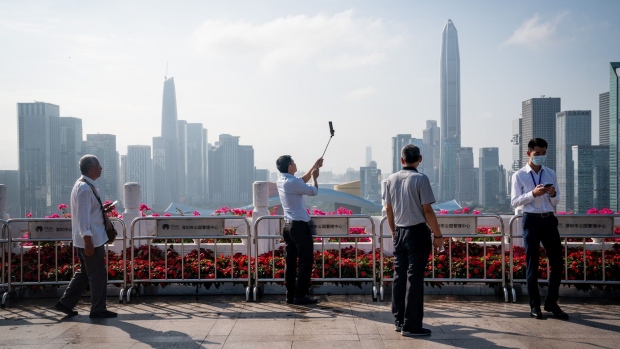 People take photographs against a backdrop of the Shenzhen skyline at Lianhuashan Park in Shenzhen, China, on Friday, Nov. 20, 2020. Photographer: Yan Cong/Bloomberg , Bloomberg

(Bloomberg) -- A spate of defaults by Chinese borrowers with seemingly impeccable onshore ratings has left antsy investors in the world’s second-largest credit market craving credible research to distinguish good debt from bad. Now a little known startup is seeking to tap that demand and is winning fans.

Though not exactly a household name, Shenzhen-based Ratingdog has slowly been carving out a name for itself within China’s corporate-bond community by flagging risks well before defaults occur. Some creditors and fund managers, long used to seeing domestic raters assign “AAA” and “AA” levels for even defaulters, are turning to independent research firms such as Ratingdog to navigate a nascent market amid a liquidity crisis.

The Shenzhen-based startup is challenging China’s broken credit-rating system, as authorities try to revamp it with new rules in the wake of the property-market meltdown led by developers including China Evergrande Group. The tiny credit assessor, which relies on funding from investors rather than issuers, has signed up almost 50,000 registered users -- more than a 50-fold jump in less than four years -- and its two WeChat accounts have garnered over 150,000 followers.

Investment managers like Li Gen said there’s demand for more such relatively independent companies. “They update ratings more frequently and can provide a perspective beyond that of traditional agencies,” said Li, chief executive officer of Beijing BG Capital Management Ltd. “Such new additions will benefit the long-term development of the credit market.”

Started as a part-time gig in 2017 by a group of frustrated buy-side analysts led by Yao Yu, Ratingdog, whose website features a border collie pup named “A-bu” as its mascot, has today grown into an operation with over 40 staff members.

The firm undertakes unsolicited reviews of companies and offers ratings to registered users free of cost, but charges investors for any additional analysis and research reports. Every weekend, founder Yao answers 50 to 100 questions from investors in the comments section on one of the WeChat accounts, where he publishes some of the firm’s research.

In an interview, 43-year-old Yao said about 40% of his clients are local banks and securities firms, while offshore investors are also increasingly keen to use his services.

“There was not enough credit research for many asset management firms, and we started an organization that’s almost like a help group,” Yao said. Prior to starting Ratingdog, he worked at CSCI Pengyuan Credit Rating Co. for 11 years in different roles before moving to China Securities Credit Investment Co. in 2015 as general manager of risk control and legal affairs department.

Yao said his firm has come up with about 20 different shades of ratings, almost like the three global majors.

Though there was some buzz around Ratingdog even before the property crisis, it drew the attention of investors in August 2021 when it downgraded Shimao Group Holdings Ltd. and its onshore unit Shanghai Shimao Co. from the equivalent of investment grade to high-yield, highlighting credit risks at what was once one of China’s largest real-estate developers. Almost a year later, Shimao missed payment on a $1 billion dollar note, its first default on a public bond after months of mounting stress, while its onshore unit delayed some domestic payments.

Yet to this day, Shanghai Shimao remains an AAA-rated entity -- practically the same as China’s sovereign -- in the eyes of Chinese firm China Lianhe Credit Rating Co., which declined to comment. In a June report, Lianhe said Shimao is under significant payment pressure, but expects recovery in its rental business to supplement cash flow.

“The existing ratings in the Chinese market are highly concentrated in the AA to AAA range, while international investors are more used to seeing more granular ratings in the global market to form their investment decisions,” according to Gina Huang, chief executive officer of S&P Global (China) Ratings.

“While what’s happening in the property market could affect investor confidence in the sector and the overall bond market, we’ve also seen a growing consensus about the need for greater transparency and analytical rigor,” said Huang.

Domestic raters have often been criticized for being overly generous and failing to highlight different shades of credit quality. While issuer-paid models are common around the world, in China they contribute to ratings skewing higher because of relatively low onshore defaults compared to global markets, and strict listing requirements until recently. Both Shenzhen and Shanghai bourses used to require bonds to have ratings of AA or above in order to be listed. That listing rule was scrapped in updated regulations this year as part of regulators’ attempts to address the shortcomings.

But such concerns aren’t new, nor are they specific to China. Even giants including S&P Global Ratings, Moody’s Investors Service and Fitch Ratings have had their fair share of trouble with regulators and lawmakers. More than a decade ago, they were partly blamed by regulators for fueling a housing bubble by handing out top grades on debt tied to risky mortgages, a market that collapsed in 2007 and sparked the global financial crisis. They faced close scrutiny, and even lawsuits in some cases.

But in China, authorities have found only limited success. The default rate of Chinese issuers with top domestic ratings is higher compared to the global market, according to a research note from CSCI Pengyuan in July, which studied default data onshore and globally between 2014-2022. The report found the average default rate of AAA-rated bonds over eight years was 4.49% domestically, while the number was 0.13% for those rated by Moody’s.

Regulators including China’s central bank have tightened supervision of the credit rating industry, with rules issued in August 2021 calling for the evaluation of default rates to be at the core of rating mechanisms and encouraging issuers to choose more than one agency to conduct ratings. They have also given approvals to local units of S&P and Fitch, though the two largely confine themselves to monitoring financial institutions.

“Now China is accumulating a default history, so that history will then be utilized in terms of projecting future default probabilities,” said Veneau. “That will ultimately lead to more credit differentiation.”

The growth in Ratingdog’s user base, however, hasn’t translated to a corresponding jump in revenue, which it projects to rise sixfold to a modest 30 million yuan ($4.3 million) in 2022 from two years ago. Yao said the company is currently focused more on attracting eyeballs.

“The free content doesn’t generate revenues directly, but is still valuable to the company,” said Yao. “The more free content we have, the more familiar others will be with us and the less we need to spend on marketing.”

Yao acknowledged that it’s difficult to generate revenue from ratings alone, but said he wants to use it as a tool to provide paid services around it. If the business hits a bottleneck, he could consider new businesses such as creating indexes, he said.

But for now, some investors say they have at least one credible alternative.

“In the current onshore market where ratings are disorderly and severely lagging, the market is lacking pricing basis,” said Li Kai, chief investment officer at Beijing Shengao Fund Management Co. “New rating agencies such as Ratingdog are valuable and meaningful to investors.”

(Updates with comment in 13th paragraph. An earlier version corrected the title of an executive in the previous paragraph.)