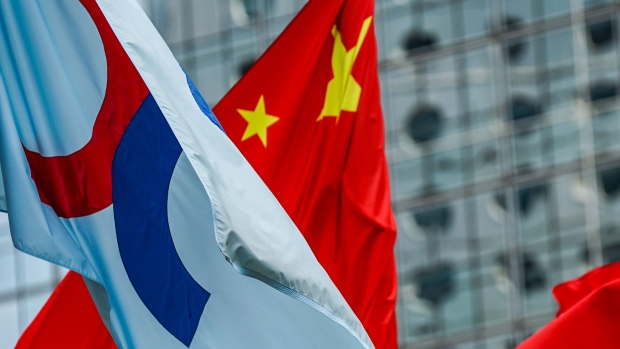 The corporate flag for Hong Kong Exchanges & Clearing Ltd. (HKEX), left, and the Chinese flag fly outside the Exchange Square complex in Hong Kong, China, on Friday, May 29, 2020. The struggle to maintain confidence in Hong Kong's future is manifesting in its stock and currency markets. Photographer: Lam Yik/Bloomberg , Bloomberg

(Bloomberg) -- Chinese e-commerce service provider Baozun Inc. has selected banks for its planned second listing in Hong Kong, which could happen as soon as September, according to people familiar with the matter.

The U.S.-traded company is working with Citigroup Inc., CMB International Capital Corp. and Credit Suisse Group AG on the listing, the people said. Its Hong Kong share sale could raise as much as $500 million, said one of the people, who asked not to be identified as the information is private.

The company joins numerous other U.S.-listed Chinese firms in seeking share sales in Hong Kong in order to expand their investor base and guard against the potential impact of rising tensions between Beijing and Washington. The U.S. is discussing whether to restrict Chinese firms’ access to American capital markets while the Senate passed a bill that could lead to them being delisted from U.S. exchanges.

Baozun, founded in Shanghai in 2006, provides retailers with e-commerce services including store operations, digital marketing, customer services, warehousing and fulfillment, according to its website. It works with China’s largest online shopping platforms like Tmall and JD.com as well as Amazon.com Inc. Baozun raised about $127 million in its Nasdaq IPO in 2015.