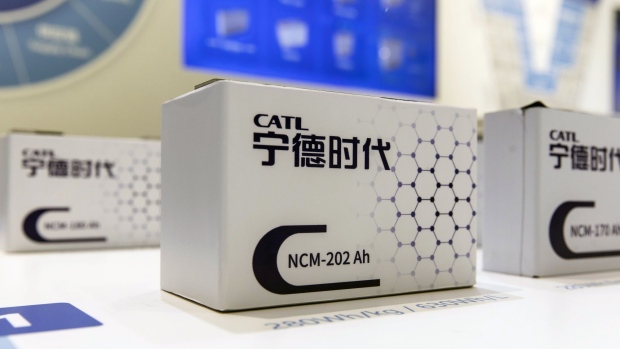 Vehicle batteries sit on display in the welcome center at the Contemporary Amperex Technology Co. (CATL) headquarters building in Ningde, Fujian province, China, on Wednesday, June 3, 2020. CATL's battery products are in the vehicles of almost every major global auto brand, and starting this month they'll also power electric cars manufactured by Tesla at its factory on the outskirts of Shanghai. , Bloomberg

(Bloomberg) -- Mercedes-Benz Group AG will join China’s Contemporary Amperex Technology Co. Ltd. in building a battery factory in Hungary with an investment of as much as 7.3 billion euros ($7.6 billion), with some of Europe’s leading automakers set to become customers too.

The plant will have capacity of 100 gigawatt hours, enough to power more than 1 million cars, and will run on renewable energy, the world’s biggest electric-vehicle battery maker, known as CATL, said Friday. Planned to be built in Debrecen, the facility will be in close proximity to customers BMW AG, Stellantis NV and Volkswagen AG, CATL said.

“There is no doubt that our plant in Debrecen will enable us to further sharpen our competitive edge, better respond to our European customers, and accelerate the transition to e-mobility in Europe,” said Robin Zeng, founder and chairman of CATL.

The Debrecen plant, which will be Hungary’s biggest investment ever, will create around 9,000 jobs, Hungary’s Deputy Foreign Minister Levente Magyar told the MTI state news service. While CATL didn’t say when production would start, Mercedes said the batteries would go into its next generation of EVs, due to go on sale from around mid-decade.

Automakers including VW and Stellantis have embarked on ambitious plans to make batteries, mostly with partners, to ensure enough supply of the core EV components. VW is building six facilities in Europe alone, while Mercedes has joined Stellantis and TotalEnergies SE in a 7 billion-euro battery venture and is pursuing a total of eight facilities globally. The European Union is also pushing for a regional battery supply chain that lessens dependence on dominant Asian players, led by Sweden’s Northvolt AB.

“This new state-of-the art European CATL plant in Hungary is another milestone for the scale-up of our EV production together with our key partners,” said Markus Schaefer, chief technology officer at Mercedes.

Mercedes first forged a partnership with CATL in 2020, while BMW is a foundation customer for the Chinese company’s factory in Erfurt, Germany, that is due to start production at the end of this year.

CATL’s Hungary investment follows a flurry of other announcements from the company on new battery sites, including a 14 billion yuan ($2 billion) investment in east China’s Shandong province and a 13 billion yuan battery project in Fujian province, where CATL is based.

CATL has also been considering an investment of up to $5 billion in either Mexico or the US, though that announcement has been delayed after US House Speaker Nancy Pelosi traveled to Taiwan, people familiar with the matter have said.