How Does the Trade War Impact Chinese Growth?

China’s economy lost steam in April, underscoring the fragility of the world’s second-largest economy as it girds for an intensified face-off with the U.S. over trade.

Industrial output, retail sales and investment all slowed more than economists forecast. The state sector continued to boost investment while private business eased off, and growth in manufacturing investment came in at the slowest pace in data dating back to 2004.

Faltering credit and consumption at home coupled with a weaker global economy means China is running out of steady growth engines right when it needs them. The soggy data spurred expectations the government will need to boost stimulus to cushion the blow from the escalating trade war, sending Asian stocks mostly higher. The yuan was little changed.

U.S. President Donald Trump rolled out 25 per cent tariffs last week, leaving Chinese producers reeling. There’s a chance such levies will be widened to all the Chinese goods America buys.

There’s ample room to step up policy support, according to Liu Aihua, a spokeswoman for the National Bureau of Statistics at a press conference Wednesday. While policymakers have rolled out targeted fiscal and monetary policy measures to stem the slowdown since last year, they can still turn to extra tax cuts, infrastructure spending, as well as trimmed policy rates and reductions in bank reserves if needed. 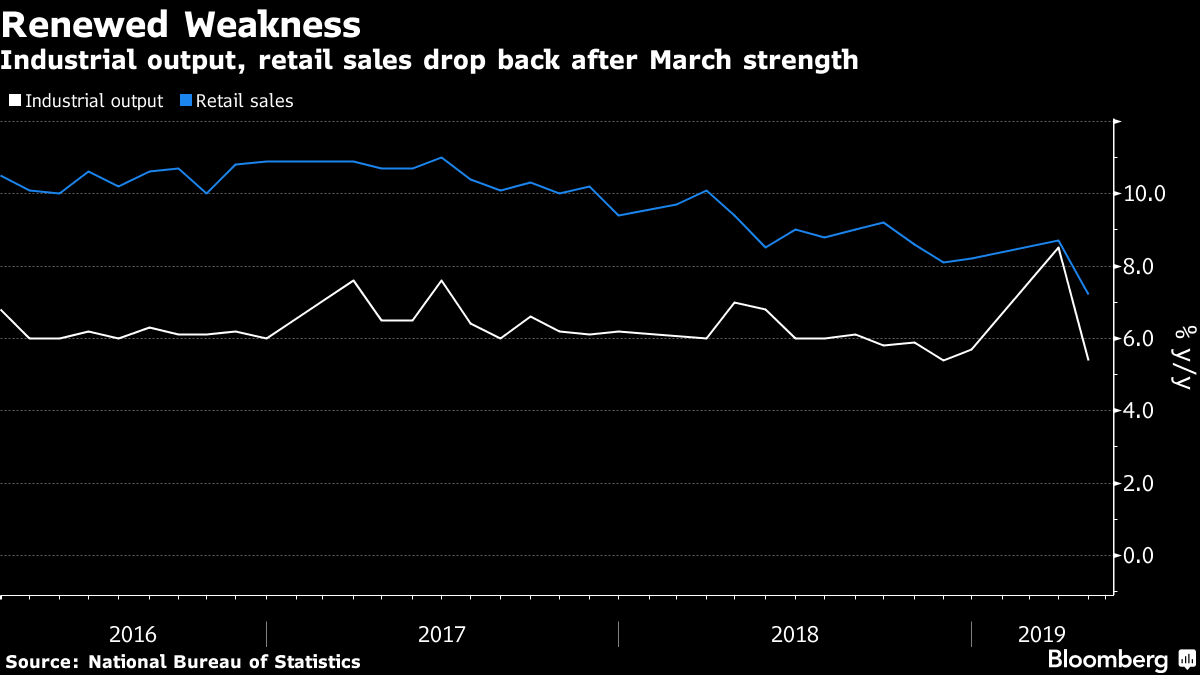 President Xi Jinping faces failure to meet the Communist Party’s long-term growth target of doubling 2010 gross domestic product by next year on the back of the hit from Trump’s new tariffs, according to a survey of economists. 2019 gross domestic product growth will be lowered by 0.3 percentage point by the rise in U.S. tariffs on US$200 billion of imports from China. If more tariffs are introduced to cover all Chinese goods, that will cost 0.6 percentage point in the 12 months after, according to the median estimates of those polled.

At the opening ceremony of the Conference on Dialogue of Asian Civilizations in Beijing on Wednesday, Xi denounced as “foolish” foreign efforts to reshape other nations as he pushed back against U.S. trade demands. “To think that one’s own race and civilization are superior to others, and to insist on transforming or even replacing other civilizations, is foolish in understanding and disastrous in practice,” Xi said.

State media has beefed up its response to Trump’s latest tariff escalation, with the once-banned phrase “trade war” roaring back into widespread use in Chinese media.

Trump tapped into the rising chances for more stimulus in China with a tweet Tuesday saying that the U.S. would win if the Federal Reserve did the same as Beijing. Later in the day he said that more quantitative easing would boost U.S. growth to 5 per cent.

Trump said he’ll meet his Chinese counterpart at next month’s G-20 summit, an encounter that could prove pivotal in reaching a deal that prevents the deepening clash from doing even more damage to the global economy.

The U.S. Trade Representative’s office Monday released a list of about US$300 billion worth of Chinese goods including children’s clothing, toys, mobile phones and laptops that Trump has threatened to hit with a 25 per cent tariff -- drawing practically all China’s exports to the U.S. into the trade war. Bloomberg Economics estimates about 1 per cent of global economic activity is at stake in goods and services traded between the two countries.

"The undershoot in April activity shows the Chinese economy had yet to find a sure footing even before the latest escalation in the trade war." "We expect fiscal support to be stepped up, mostly on the infrastructure. Monetary policy is expected to pivot back to an approach where broad-based measures play a dominate role."-- Chang Shu and David Qu

One potential bright spot from Wednesday’s report is property, with investment rising to 11.9 per cent in the first four months. Unemployment also dipped, a sign that stimulus measures since last year had started to stabilize the economy before the latest challenges. The survey-based unemployment stood at 5 per cent, versus 5.2 per cent the previous month.