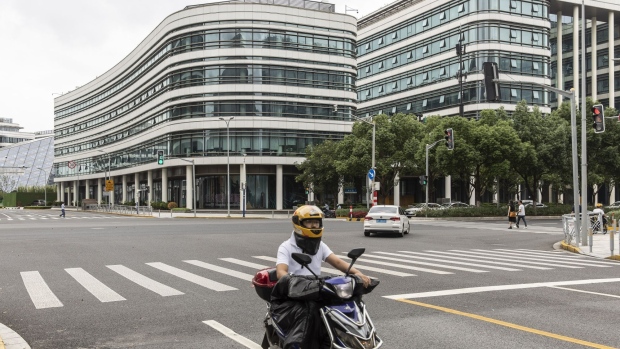 China Evergrande Group's unfinished Evergrande Hongqiao International Center in Shanghai, China, on Wednesday, Sept. 15, 2021. Chinese authorities have told major lenders to China Evergrande Group not to expect interest payments due next week on bank loans, according to people familiar with the matter, taking the cash-strapped developer a step closer to one of the nation’s biggest debt restructurings. Photographer: Qilai Shen/Bloomberg , Bloomberg

(Bloomberg) -- China Evergrande Group plans to let consumers and staff bid on discounted properties this month to repay them for billions in overdue investment products as the embattled developer seeks to preserve cash, according to people familiar with the matter.

The company will organize an online property event by Sept. 30 for investors who opt for discounted real estate in lieu of cash, said two employees who were briefed on an internal call Thursday and asked not to be identified. Evergrande didn’t respond to a request for comment on the plan.

The world’s most-indebted property developer is pushing the discounted real estate as the preferred of three options for angry investors seeking repayments. The high-yield products paying as much as 13% a year have become a lightning rod for cash-strapped Evergrande, with investors and staff protesting losses and delayed payments from investments that were marketed as safe. Demonstrations that are breaking out across China could sway any bailout decisions by the government, which places a high priority on social stability.

More than 70,000 people bought the products, including many Evergrande employees, Bloomberg reported earlier, citing an executive of Evergrande’s wealth division. About 40 billion yuan ($6.2 billion) of them are now due, Caixin reported.

In an effort to steer investors away from cash repayments, the company is pushing steep discounts on property assets. Investors can invest in residential housing units at a 28% discount, offices at a 46% discount and stores and parking units at 52%. Discounted rates can’t be lower than price floors designated by local governments. The property discounts are a voluntary repayment option, according to the briefing.

The details of the new plan, which was first floated on Monday, appear to favor large holders. Investors can get one token to bid on their ideal property for every 500,000 yuan invested, according to the people briefed. The more tokens, the better the chances of grabbing a preferred unit, the people were told.

Under the cash option, investors can choose to be repaid 10% of their principal and interest every quarter, meaning they would be fully repaid in two and a half years, Bloomberg reported earlier. Investors in the products can also opt for payment discounts on residential units they’ve already purchased, according to the revised plan unveiled Monday.