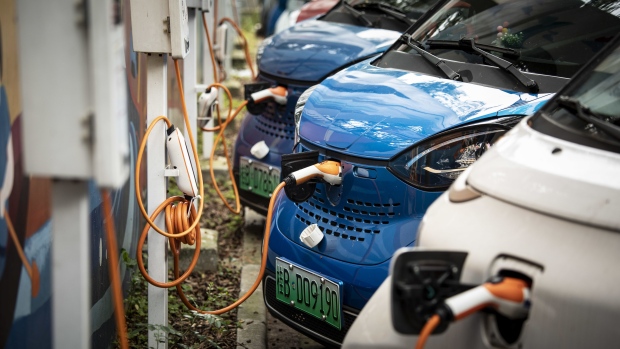 SAIC-GM-Wuling Automobile Co. electric vehicles are plugged in at charging stations at a roadside parking lot in Liuzhou, China, on Monday, May 17, 2021. Liuzhou has used test drives, free parking and abundant charging points to get people to embrace EVs. Photographer: Qilai Shen/Bloomberg , Bloomberg

(Bloomberg) -- Electric vehicles sales in China are forecast to hit a record 6 million this year as demand for cleaner cars surges.

The China Passenger Car Association raised its estimate from 5.5 million, after releasing data showing deliveries of new-energy vehicles more than doubled in July to around 486,000 units -- accounting for 26.7% of the new auto market. Overall passenger vehicle sales rose 20% from a year earlier to 1.84 million units, the PCA said Tuesday.

The increased forecast represents a doubling from last year’s 2.99 million NEV sales, underscoring the dramatic growth in demand for cleaner cars in China, and the challenge for legacy automakers to adapt in a market that is rapidly going green.

The increased forecast of 6 million is still “relatively cautious,” the PCA in a statement, adding it could be further increased at the start of the fourth quarter.

Tesla Inc. delivered 28,217 cars, with 8,461 going to the local market and 19,756 exported, mostly to Europe and Asia. The sharp drop of 64% from June was mainly caused by production shutdowns to upgrade its Shanghai factory as part of a plan to double annual capacity to 1 million vehicles.

Overall, domestic automakers are grabbing a bigger slice of the NEV market. The main Chinese brands commanded 73% of NEV passenger car sales last month, up 9 percentage points from a year earlier. Local upstarts including the likes of Xpeng Inc., Li Auto Inc. and Nio Inc. accounted for 16.5%, while the main international joint ventures (which excludes Tesla) took just a 6.5% share.

The central and local governments have also taken steps to help the auto industry recover from Covid lockdowns and restrictions that crushed sales earlier this year. In May, the central government cut purchase taxes on some low-emission passenger vehicles by 50%, while municipal governments have pitched in with subsidies and incentives to entice buyers.

Read more: Not a Single Car Was Sold in Shanghai in April

Despite sporadic outbreaks of Covid-19 in parts of the country, overall auto production and supply chains have largely recovered. Passenger-vehicle sales may resume double-digit growth this half, after falling for four consecutive quarters because of supply chain constraints, Bloomberg Intelligence analyst Steve Man said in a recent note.