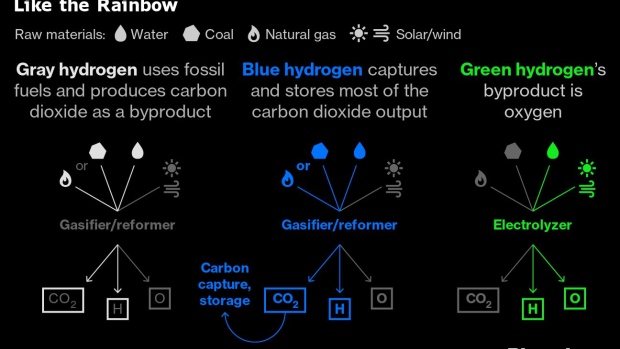 Top solar manufacturers including Longi Green Energy Technology Co. are ramping up the production of electrolyzers, the equipment needed to make green hydrogen, the cleanest form of the fuel. They are accelerating investments on a bet that a market will boom as industries and consumers switch to lower-carbon fuels.

To come out in front in the global hydrogen race, Chinese companies are following the same playbook used to dominate solar -- slashing prices and production costs, dramatically increasing installations and accelerating the development of new technologies.

“In the solar supply chain, Longi played the role of leading the industry’s progress with technology,” said Wang Yingge, deputy general manager of Longi’s hydrogen energy technology unit. “In hydrogen equipment, Longi will continue to focus on and invest heavily on research and development.”

China will account for more than 60% of global electrolyzer installations globally in 2022, with the market increasing fivefold over this year, according to BloombergNEF. The China Hydrogen Alliance said earlier this year that the fuel could make up 20% of the nation’s energy mix by 2060, the deadline that President Xi Jinping has set for China to become a carbon-neutral country.

Yet despite the positive outlook, the solar giants face steep challenges in developing the hydrogen market. The industry still has a long way to go to bring down prices, and it is missing the key government incentives that helped light a fire under the solar and wind sectors.

Green hydrogen is far from competitive compared to other fuels. Hydrogen produced by renewables currently costs at least $3.22 per kilogram in China, nearly double the price using coal, according to BloombergNEF. And dirtier gray hydrogen, produced by fossil fuels, makes up the bulk of China’s hydrogen market. It accounted for more than 63% in 2020, compared with only 1.5% for green hydrogen, according to a white paper published by China Hydrogen Alliance.

“The biggest challenge ahead is the cost,” said Libby Zhong, co-leader of Ernst & Young’s greater China energy and resources sector. Without policies like those that boosted solar and wind power development, it will be very difficult for green hydrogen to receive sufficient support at this early stage, she said.

China has yet to introduce a national hydrogen plan, and the only state-wide subsidy program is limited to supporting fuel cell batteries, which will directly drive the consumption of hydrogen but won’t necessarily favor a clean production process or bolster electrolyzer development.

Longi’s Wang said he hopes the government will introduce subsidy programs that set benchmark prices for hydrogen produced by renewables, and expects the rising cost of emitting carbon in China could boost green hydrogen consumption. The company projects the price for electrolyzers will fall more than 30% in the next three to five years.

Another big difference between the development of solar panels and hydrogen electrolyzers is the market they’re selling into. While solar customers can plug panels into existing grids and immediately begin selling the electricity, allowing for fast adoption, the uses for hydrogen are more limited and disjointed.

China’s state-owned giants are trying to close that gap. Sinopec, the top oil company, has started to build the world’s largest green hydrogen project, with a capacity to supply 20,000 tons of the clean fuel each year starting in mid-2023.

Over one-third of state-owned companies are making plans for hydrogen production, storage, distribution and utilization, according to China’s State-Owned Assets Supervision and Administration Commission. Much of the enthusiasm is being driven by pressure to cut emissions to meet climate targets and the increasing cost of carbon, said Mao Zongqiang, a professor at the Institute of Nuclear and New Energy Technology at Tsinghua University in Beijing.

While the state-owned firms are making bigger bets across the board on hydrogen, private companies such as Longi and Sungrow Power Supply Co. for now are sticking with the more limited focus on electrolyzer development.

Longi hasn’t built capacity in downstream applications such as fuel cell batteries or hydrogen production as it “has not seen a clear direction” of where the greatest potential will be, Li Zhenguo, president of Longi, said in a recent interview.

Nonetheless, the solar giants expect to remain at the forefront of the industry as companies from oil refiners to steel-makers gravitate toward hydrogen.