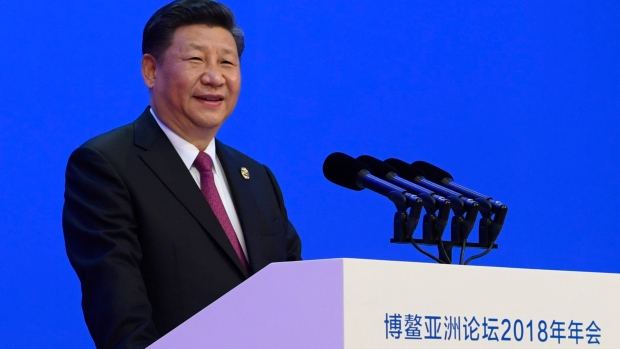 In this photo released by Xinhua News Agency, Chinese President Xi Jinping delivers his opening speech at the Boao Forum for Asia Annual Conference in Boao in south China's Hainan province, Tuesday, April 10, 2018. Xi promised to cut auto import taxes, open China's markets further and improve conditions for foreign companies in a speech Tuesday that called for international cooperation against a backdrop of a spiraling dispute with Washington over trade and technology. , (Li Xueren/Xinhua via AP)

Carmakers from BMW AG to Toyota Motor Corp. got some good news from China after President Xi Jinping reiterated a pledge to reduce import tariffs on vehicles this year, heeding decades-long pleas from companies seeking better access to the world’s biggest auto market.

China will “significantly lower car import tariffs” and “sincerely hopes to boost imports,” Xi said in a speech at the Boao Forum in Hainan Tuesday. Xi also reiterated plans to relax foreign ownership limits for car ventures and said the government will try to roll out the policies as early as possible. He didn’t offer details.

Shares of local carmakers BAIC Motor Corp., BYD Co. and Guangzhou Automobile Group Co. fell after the speech as lowering the existing 25 percent import tariff would encourage foreign carmakers to bring in more vehicles. Just a week ago, China proposed an additional 25 percent import tax on vehicles made in the U.S. as the two countries ratcheted up rhetoric that threatens an all-out trade war between the world’s two largest economies.

“This is a very important action by China,” Tesla Inc. Chief Executive Officer Elon Musk said in a Twitter post. “Avoiding a trade war will benefit all countries.”

BAIC, a local partner of Daimler and Hyundai Motor Co. fell as much as 11 per cent in Hong Kong trading, the biggest intra-day drop since September 2016. The following table shows the intraday decline of carmaker shares:

High-end autos, in particular, will feel the effects of a tariff cut, as less of their production has moved locally. Toyota’s Lexus stands to benefit as the only premium Japanese marque that doesn’t manufacture in China or hasn’t announced plans to do so.

“This is a boon for the Chinese luxury auto market,” Steve Man, a Bloomberg Intelligence analyst in Hong Kong said.

Luxury sales leader Audi, part of Volkswagen AG, has been making cars in the country since 1996. General Motors Co.’s Cadillac, which has relegated Lexus to fifth in the luxury-car rankings, opened a factory in Shanghai in 2016.

China imported 1.22 million vehicles last year, or about 4.2 percent of the country’s total sales of about 28.9 million automobiles.

Xi was reiterating a pledge by Chinese leaders to open up the nation’s auto sector. At the annual gathering of China’s National People’s Congress last month, Premier Li Keqiang said the nation will cut tariffs on imported cars this year.

Besides the tariffs, China requires overseas automakers to form joint ventures with local manufacturers in which the foreign companies’ stakes are capped at 50 percent. The government’s aim when introducing the policy in the 1990s was for its then-fledgling auto industry to benefit from technology transfer by operating along with global giants including Volkswagen and GM.

Any tariff cut could have a “pretty big” impact on local manufacturers, while relaxation of joint-venture rules may have a long-term effect on the Chinese auto industry, said Cui Dongshu, secretary general of China’s Passenger Car Association.

--With assistance from James Mayger Yan Zhang and Ma Jie